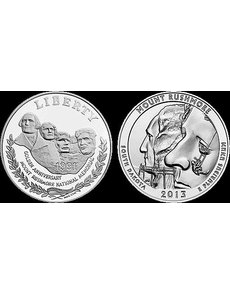 I visited Mount Rushmore in the summer of 2000, while traveling westward across the northern United States by car after graduating from college.

I was headed to Seattle and to start my career in numismatics. My brother accompanied me on the road trip, and we hit all of the main tourist spots along the way.

A childhood friend had warned me that the monument would seem smaller in person than expected, but I found it captivating. I was taken in by the audacity of its concept and its scale. We drove away filled with patriotic fervor.

Mount Rushmore’s place as a symbol and landmark has earned it good standing in the realm of U.S. numismatics. The monument has appeared on five different coins.

First, on its 50th anniversary in 1991, it was honored with a three-piece commemorative coin series, consisting of a copper-nickel clad half dollar, silver dollar and gold $5 coin. It was featured on the South Dakota State quarter dollar in 2006. Now, again, in 2013, it is featured on the Mount Rushmore National Memorial quarter dollar.

For the 2013 incarnation, they wanted to do something different.

According to the Mint’s website at www.usmint.gov: “The reverse design was inspired by photos of men who are adding the final details to Thomas Jefferson’s face. This new design is distinctly different and offers a unique and educational perspective on how Mount Rushmore was created and sculpted.”

The uniqueness of this design seems to have been the overriding consideration in its selection. It’s a big departure from the Mint’s normally staid and literal work.

Unfortunately, almost everyone who sees it comments on the same thing. Jefferson’s nose seems to overwhelm the rest of the design, making it appear to celebrate the third president’s olfactory sense rather than a shrine to democracy.

The 2013 Mount Rushmore quarter dollar is scheduled for release into circulation in November of this year, although it already can be purchased in Uncirculated Mint sets and Proof sets, with Proof versions in both silver and copper-nickel clad.

The coin that has yet to be released is the 5-ounce silver version. Likely, the large format silver coin will be the key Mount Rushmore coin for a complete 18-piece set. In 1991, more than 800,000 Mount Rushmore commemorative silver dollars were sold. In contrast, the Uncirculated 2013-P 5-ounce silver quarter dollar has an authorized mintage of just 25,000 and is expected to sell for $154.95.