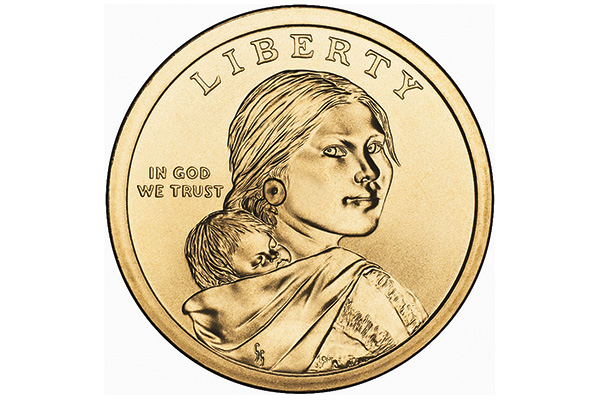 The Sacagawea dollar, which features a portrait of the Lewis and Clark companion with her infant son, was first issued in 2000. The date was moved to the edge of the Native American dollar versions.

If you’re drawing a blank on last-minute Mother’s Day gift ideas, don’t forget the famous moms that have left their mark all over commemorative coins that can be purchased from the U.S. Mint, coin dealers, or eBay if you're in a bind. (Though to get any of them for Mom this late in the game might require express shipping.)

In the first post of our Mother’s Day series, let's have a look at one of numismatics’ most notable ladies:

As the woman who is featured on her coin with her child, this Lewis and Clark companion has to lead off.

Her coin: Sacagawea is honored with a U.S. dollar coin issued since 2000. On her dollar, which featured a flying eagle on its reverse until the Native American versions were released beginning in 2009, Sacagawea is portrayed holding her infant son, Jean-Baptiste Charbonneau, on her back.

Her story: The only woman to join the Meriwether Lewis and William Clark’s Corps of Discovery journey from St. Louis to the coast of the Pacific Northwest and back again, Sacagawea served as a translator along with her husband, French Canadian fur trader Toussaint Charbonneau, and was also a valuable guide, according to PBS. Six years after the expedition, which took place between 1804 and 1806, Sacagawea died at the age of 25, soon after giving birth to a second child, daughter Lisette.

How to buy: Sacagawea dollars of all years, conditions and prices can be found on eBay. The highest-priced Sacagawea dollar listed on the site is a 2003 Proof NGS MS-69 listed for $2,995. (No one has bid on it as of Tuesday afternoon.)

Up next in Coin World's Mother's Day series: Edith Roosevelt