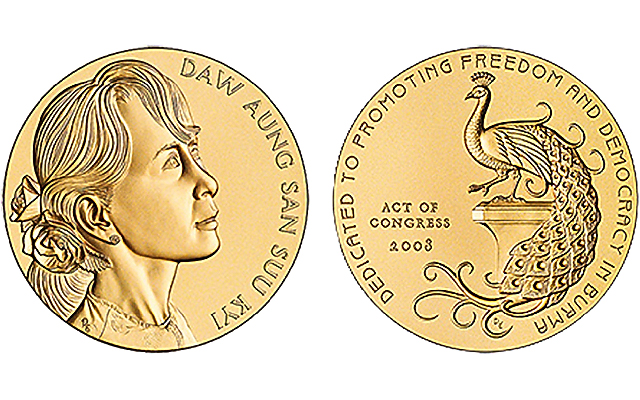 The 3-inch Daw Aung San Suu Kyi bronze medal honors a woman who has dedicated her life to bringing freedom and democracy to Myanmar.

If you’re drawing a blank on last-minute Mother’s Day gift ideas, don’t forget the famous moms who have graced commemorative coins and medals that are available for purchased from the U.S. Mint, coin dealers, or eBay if you're in a bind. (Though to get any of them for Mom this late in the game might require express shipping.)

In the third post of our Mother’s Day series (our first post featured Sacagawea and our second featured Edith Roosevelt), we learn a bit about a brave woman who dedicated much of her life to her people:

The Nobel Peace Prize winner who fought for human rights in her native Burma (now known as Myanmar) is a mother who, despite being apart from them for many years, sets an amazing example for her kids.

Her coin: It’s a medal, actually. The Daw Aung San Suu Kyi bronze medal, "a duplicate of the Congressional Gold Medal awarded to Daw Aung San Suu Kyi, recognizes and honors her courageous and unwavering commitment to peace, nonviolence, human rights and democracy in Burma," according to the U.S. Mint. It features a portrait of Suu Kyi on the obverse with an inscription of her name around its edge. On the reverse is a peacock with the inscription “DEDICATED TO PROMOTING FREEDOM AND DEMOCRACY IN BURMA.”

Her story: Daw Aung San Suu Kyi was awarded with the 1991 Nobel Peace Prize for “her non-violent struggles for democracy and human rights” in her native Burma, according to the official website of the Nobel Prize.

Born in 1945, Suu Kyi was the daughter of Burmese liberation activist Aung San. She carried out her studies and started a family abroad before returning home to Burma in 1988 and co-founded the National League for Democracy (NLD), which opposed the military junta that had controlled Burma since for more than 25 years.

Suu Kyi took after Mahatma Gandhi and embraced a nonviolent approach to her goal of transitioning her country’s leadership from the military to an elected government representing Burma’s different ethnic groups.

"In the election in 1990, the NLD won a clear victory, but the generals prevented the legislative assembly from convening. Instead they continued to arrest members of the opposition and refused to release Suu Kyi from house arrest," the Nobel Prize website reads.

Suu Kyi remained under house arrest on and off until 2010, according to Biography.com. In 2012, she won a parliamentary seat.

She is the mother of sons Alexander and Kim, who lived in the United Kingdom with her husband, Michael, while she fought for freedom in Burma. She told BBC News in 2012 she has “personal regrets” about not being able to spend time with her family during her years in Burma, but believes she was meant to serve the people of Burma.