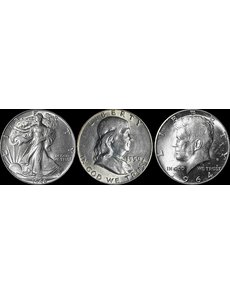 In the last “Found In Rolls” column, I outlined some of my discoveries as they pertained to the rolls of half dollars that I was able to obtain from my local bank.

I told readers that I would share other recent discoveries with them in my next column, so here they are.

I really wish that it was possible for me to have the images in this column covered up in some way so that I could dramatically, and with great theatrical flair, pull the covering away and yell out something like “Voila!” — thereby leaving you in stunned silence at my discoveries.

Actually, I have an idea!

If done correctly, you can feel the sensation that I am shooting for by placing your left hand over the images, and then quickly moving your hand, to reveal a portion of my additional finds.

Yes, I said a portion, as I found many more silver half dollars than the ones shown here.

Among those finds were a 1946 Walking Liberty half dollar in About Uncirculated 58 condition and a 1959-D Franklin half dollar grading AU-50.

These were not the only silver half dollars ultimately added to my found in rolls collection.

They were all in what might be called average circulated condition as their grades ranged from Very Good 8 to Fine 12.

The 1944-S half dollar, however, appears to have been buffed up at some point in its past as it has a very unnatural shine to it.

Silver is silver, though, so I am not complaining!

The 1960 Franklin half dollar is a strong AU piece and may even be considered Mint State 60, while the others would be graded VF-20.

All in all, this was a great group of coins and I am happy to have ended 2013 on a super high note!

And to start the New Year, consider sharing your discoveries with me by sending me an email to foundinrolls@netscape.net.