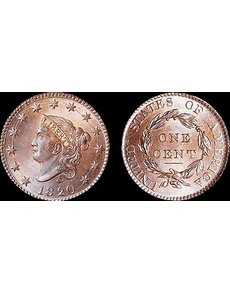 This 1820 Coronet cent from the Randall Hoard is a mate to the 1818 cent illustrated in the June 10 column. These two dates are plentiful and, in the context of early coppers, quite affordable. Is there room for one in your collection?

In 1869 when one dealer called the copper cents dated 1816 to 1820 from the so-called Randall Hoard modern restrikes, another dealer, Edward D. Cogan, revealed the truth when he countered by printing a letter from a Norwich, N.Y., storekeeper who had recently owned them:

“I should not sell coin that I knew or believed to be re-strikes without letting it be known. The bright, Uncirculated cents I have sold of 1817, 1818, 1819, 1820, and 1825, I am very sure are not re-strikes. I bought them of Wm. H. Chapman & Co., dry goods merchants of this village, and the head of the firm, W.H.C., informed me that he got them of a wholesale merchant in New York, who informed him that he got them from a merchant in Georgia; that he took them as a payment on a debt, and that the Georgia merchant wrote him that they were found since the war in Georgia buried in the earth.

“Mr. Chapman said to me that he was in New York about the time the cents were received there, and that the merchant who had them thought they were too large to use, and did not know what to do with them; and that he (Chapman) thinking that his customers here would be pleased with bright cents, offered ninety cents a hundred for them, which was immediately taken.

“I then went to the store and asked W.H. Chapman if he had disposed of many of his bright cents. He replied, ‘No. I made a bad bargain,’ and laughed about their being regarded as his counterfeits.

“I then offered to take them at the price he paid — ninety cents a hundred — and he was very willing to let me have them. They were loose together in a small keg, and the great mass of them were of 1818; and a great many, though apparently Uncirculated, were more or less corroded or discolored. I enclose herewith one of the 1817 and 1818, discolored on one side and bright on the other. ...

In the second half of the 20th century, Walter Breen and others expanded the scenario: More than one keg may have been found. The coins were found beneath a railroad platform (not buried), and so on.