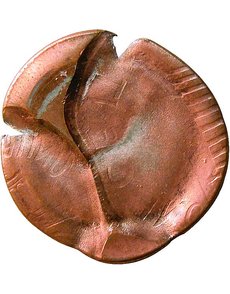 This undated broadstruck Lincoln cent features two brockages that were generated by two previously-struck cents that intruded into the striking chamber prior to the strike. As the intrusive coins were struck, their expanding edges met to form a chain strike. 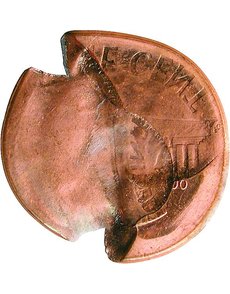 A partial (off-center) die cap produced an aligned partial brockage in the upper right quadrant of this broadstruck 2000 Lincoln cent. An intrusive, off-center cent insinuated itself between the die cap and the planchet, leaving a small brockage in the middle of the coin. 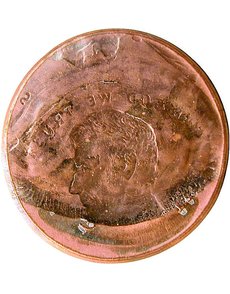 A double-struck Lincoln cent flipped over and was struck into the obverse face of this 1999 cent. 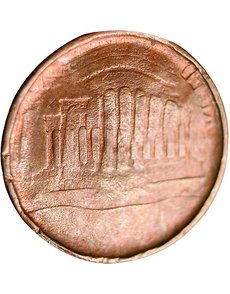 Three brockages of the reverse design decorate the obverse face of this cent. It is an unusual clashed cap strike.

For error collectors, the axiom “more is better” is deservedly applied to brockages.

A brockage is an incuse (sunken) mirror-image impression that is generated when a coin (or any piece of die-struck material) is struck into a planchet or another coin. Coins with two or more brockages on the same face are scarce and arise under a number of different circumstances.

Multiple brockages are more often produced during a single strike. One simple scenario involves two previously-struck coins intruding simultaneously into the striking chamber. The massively broadstruck undated Lincoln cent depicted here shows two brockages of the reverse design lying side-by-side. The smaller brockage shows the Lincoln Memorial, the letters unite and the o from one. The larger brockage shows the memorial and the words one cent. The paired brockages were generated by two cents that landed on top of the planchet represented by the illustrated coin.

As the intrusive coins were struck, their expanding edges met in the middle to form a chain strike.

Multiple brockages can also be generated by every conceivable combination involving a die cap and a free-floating coin that insinuates itself between the die cap and a planchet. The upper right quadrant of the illustrated 2000 Lincoln cent is occupied by a first-strike brockage from a partial (off-center) die cap. It is radially aligned with the die-struck design on the reverse face and is therefore an “aligned partial brockage” (other examples can be seen in the Jan. 17 “Collectors’ Clearinghouse”). The brockage consists of the lower right corner of the memorial, the designer’s initials (fg), and the letters e cent.

Before the strike, a free-floating cent with a 90 percent off-center strike intruded between the die cap and the planchet represented by the illustrated brockaged cent. The unstruck portion of the off-center cent left a featureless surface that occupies the left side of the 2000 cent. The struck tongue of metal left a small, centrally located brockage that partly overlaps and obscures the brockage generated by the die cap. It takes the form of a shallow, semilunar indentation that contains the upper left corner of the memorial and the adjacent word united.

An off-center planchet can also stick to a die cap when struck, transforming the off-center coin into a partial die cap. The two adherent die caps will then produce a double brockage, one of them an aligned partial brockage.

An obvious source for a multiple brockage is a multi-struck coin. This scenario is illustrated by a broadstruck 1999 Lincoln cent with a 90 percent flipover partial brockage from a double-struck cent. One brockage consists of Lincoln’s head, the motto in god we trust and part of liberty. The second brockage consists of the front of Lincoln’s bust and the s of trust. Abnormally low striking pressure left impressions that are crisp and only slightly expanded.

From small to large on one coin

Our final example is a copper-alloy cent with three overlapping brockages of the Lincoln Memorial on the obverse face. The brockages follow a size progression, with the smallest being the clearest and most complete. This is a clashed cap strike reflecting two earlier collisions between the die cap and the reverse die.

The largest brockage is the primary brockage, generated by the original reverse design of the cent that adhered to the obverse die. After striking a few planchets, the expanded working face of the die cap struck the reverse die directly, picking up a new impression. This secondary raised design is responsible for the mid-size brockage, which can be referred to as the secondary brockage.

After striking a few more planchets, the working face of the die cap once again struck the reverse die directly. A fresh raised design was picked up by the working face and this is responsible for the smallest brockage, which can be termed the tertiary brockage.

Other clashed cap strikes can be seen in the August 30, 2010, “Collectors’ Clearinghouse” column.