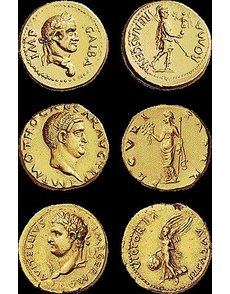 Roman gold coins from the Archer M. Huntington Collection are heading for auction. Highlighting the Oct. 17 auction in Zurich by Numismatica Ars Classica is this trio of gold aurei from the Year of the Four Emperors, depicting Galba, top; Otho, middle; and Vitellius, bottom.

All images courtesy of www.arsclassica.com.

More coins from the Archer M. Huntington Collection are entering the marketplace.

Numismatica Ars Classica, a coin dealer and auction house with locations in Zurich, London and Milan, will offer Roman gold coins from the collection of the famed philanthropist, in an Oct. 17 auction set in Zurich. The firm will offer the second part (containing approximately 100 coins) in an auction next spring.

In addition, at least four other sales of coins from the collection, conducted by three other companies, are scheduled between October and December, according to Juliet Divo, who runs NAC’s Zurich office. At press time Aug. 30, officials with two of the firms that Divo said will offer the coins had not confirmed their sales would feature Huntington Collection coins.

In total, 327 coins from the Roman collection will be offered for sale in NAC’s 67th sale on Oct. 17 at the Hotel Baur au Lac in Zurich. The Roman gold coins in the Oct. 17 auction are highlighted by a large selection of extremely rare and valuable aurei, as well as some solidi.

Three aurei from the Year of Four Emperors are among the chief lots in the auction.

An aureus of Galba in the auction is “an apparently unrecorded variety of an extremely rare type.” The aureus, in Good Extremely Fine condition, has an estimate of 100,000 Swiss francs (about $104,327 U.S.).

An aureus of Vitellius is “possibly the finest of very few specimens known” and has the same estimate as for the aureus of Galba. The coin of Vitellius is in Extremely Fine condition with “a very appealing portrait of high style [and] light reddish tone.”

Because Huntington, a famed philanthropist, formed his collection so long ago (with many of the coins purchased about a century ago), the previous individual sales history for many pieces is just as old; the aureus of Otho was sold in a May 1912 auction (apparently in Italy), while the Vitellius aureus dates to an 1887 sale likely in France. No auction record is reported for the Galba aureus.

Divo could not confirm whether NAC was among the consortium of four partners that won the Huntington Collection bid in a single-lot, sealed-bid sale ending March 8. The sale was conducted by Sotheby’s for the Hispanic Society of America, after the HSA won the collection in a legal battle with the American Numismatic Society, where Huntington had placed the collection on permanent loan. Huntington founded the HSA and was a major benefactor to both the ANS and HSA.

Following the conclusion of the March sale, an anonymous buyer purchased 19,206 pieces from the 37,895-piece collection from the winning bidders and placed them on long-term loan with the American Numismatic Society

While the ANS has received the quantity of lots, which experts have said makes for valuable research, many of the coins entering the marketplace are the commercially valuable lots.

The first public auction of coins from the collection, of 1,004 coins, was conducted June 26 by Madrid-based Jesus Vico (Coin World, July 30 issue). Vico has confirmed plans to conduct at least two more auctions with an estimated 1,500 coins each, sometime in October and November.

Divo confirmed that additional coins from the Huntington Collection will be offered by Jean Elsen & ses fils, Numismatica Genevensis SA and NAC SpA, the latter firm being the Italian branch of Numismatica Ars Classica.

NAC’s catalog of the Huntington Collection offering will be posted at the firm’s website www.arsclassicacoins.com beginning in early September. Printed catalogs may be ordered as part of an annual subscription for $100 through the Zurich office.

The lots will be on exhibit in Numismatica Ars Classica’s London office until Oct. 2 and from Oct. 16 in its Zurich office.