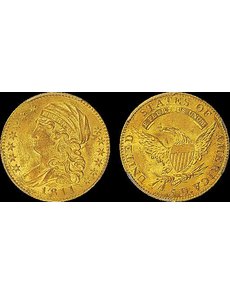 Collectors have more options than ever before when buying and selling rare coins, especially if using online auctions.

On Feb. 9 the online auctions on GreatCollections.com, led by the Dr. Spencer Paterson Collection of U.S. type coins, brought $1.28 million. The firm’s auction of Dr. Paterson’s set, which consisted of coins mostly acquired by the collector over the past decade, was announced in a Jan. 19 press release for a sale on Sunday, Feb. 9.

The collection was full of the “bread and butter” rarities that are welcome staples in any advanced U.S. coin auction, like an 1856 Flying Eagle cent in PCGS Proof 63, with a green Certified Acceptance Corp. sticker, that sold for $15,510.

Early gold was a highlight of Paterson’s collection, with multiple outstanding Draped and Capped Bust gold issues, including an 1811 Capped Draped Bust, Small 5 gold $5 half eagle graded PCGS MS-61, with a green CAC sticker, that realized $13,260.

The collection was previewed by prospective bidders at the Long Beach Expo, Jan. 30 through Feb. 1 and at the firm’s Irvine, Calif., office before the auction.

That the collection was available for viewing prior to the auction likely provided bidders with a level of confidence when placing five- and six-figure bids, especially for toned coins, copper coins and early gold coins, which can often be challenging to accurately photograph.

In the U.S. coin market, the two largest auction houses — Stack’s Bowers Galleries and Heritage Auctions — will both be conducting official auctions at the American Numismatic Association World’s Fair of Money for the next few years. Both firms also maintain platforms for their own online auctions.

While the two firms are the auction heavyweights of the U.S. coin market, smaller firms have shown growing strength.

For example, Ira & Larry Goldberg Auctioneers recently sold the Missouri Cabinet Collection of half cents for more than $18 million at a Jan. 26 auction. Bonhams sold the Tacasyl Collection of 27 classic U.S. Proof gold coins for nearly $11 million in a Sept. 23, 2013, auction in Los Angeles.

Legend-Morphy hosts several rare coin auctions each year, the last several of which have seen prices realized in the $3 million range. ¦