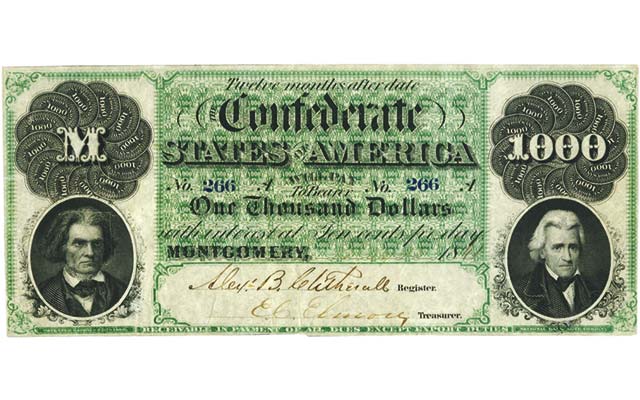 Six examples of Confederate paper currency issued in 1861 sold for a combined total of $198,575 including buyer’s fee in the first session of the CSNS Currency Signature Auction by Heritage Auctions in Schaumburg, Ill., on April 22.

Four of them were the rare Montgomery, Ala., $1,000, $500, $100, and $50 notes issued there in the earliest days of the Confederacy before the move of the capital to Richmond. The other two were the $10 Liberty seated with eagle and shield and $5 Indian princess issues from Richmond.

Confederate collectors refer to this group collectively as the “Big Six.” Pierre Fricke in his 2005 work Collecting Confederate Paper Money remarks that acquiring these notes, particularly in high grade, is difficult.

Although the monochromatic Richmond notes are not as attractive as the brightly hued Montgomery ones, and are of low quality in terms of both printing and paper, they are of equivalent rarity to the high denomination Montgomery issues.