Money used in North Carolina over three centuries on display 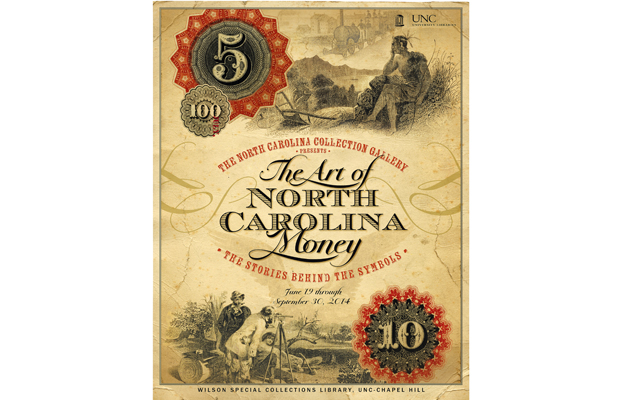 Examples of items used as money in North Carolina throughout three centuries are on display in a free exhibit until Sept. 30, 2014, on the campus of the University of North Carolina in Chapel Hill, N.C.

An exhibit spanning three centuries of money in North Carolina is on display in Chapel Hill until Sept. 30, 2014.

The free exhibit displays more than 80 examples of money, tokens and medals from North Carolina and other places, with the oldest item being a handwritten £5 note from 1729 and the newest a 2009 PLENTY note issued by the Piedmont Local Economy Tender and used in and around Chapel Hill.

“With so many different types of money in circulation, it was often difficult to distinguish the good from the bad,” a library blog post reads. “Issuers quickly learned that people were less suspicious of attractive objects than plain ones, so they embellished the money with detailed pictorial elements known as vignettes.”

Currency issued during the mid-1800s featured “imagery related to agriculture and industry, but some bills issued by Southern states leading up to the war, and later by the Confederate States of America, showed scenes of seemingly contented slaves at work.”

The exhibit features examples of the engraver’s art including an 1857 $5 obsolete note issued by a Boston bank depicting Santa Claus on a rooftop, and an 1837 note issued by the Manual Labor Bank in Philadelphia seemingly depicting an Elvis Presley look-alike at work.

The exhibit draws on the extensive numismatic collection of the North Carolina Collection Gallery.

For more information about the exhibit visit the UNC Libraries Visitor Information page for hours and parking information.