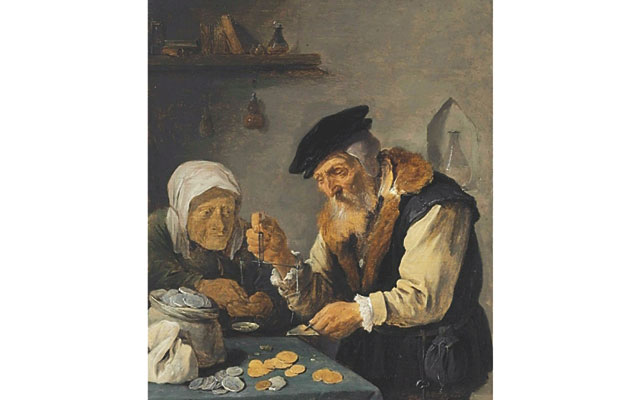 Depictions of money often feature prominently in paintings. Sometimes coins are depicted in visual representations of the Greek mythological figure Danaë where Zeus came to her in the form of golden rain (often depicted through coins). Other times money is shown in still-life paintings to represent wealth and bounty.

Money is often shown in paintings of merchants, but the meaning of these pictures often goes beyond the mere depiction of a merchant’s day-to-day activity.

The picture’s strong price was a bright spot in a sale that was characterized by some as a disappointment. Bloomberg News, in its recap (bearing the title “Old Masters Collect Dust as $42 Million Sales Fall Short”), noted that Christie’s three Jan. 28 New York auctions brought $36.6 million against an estimate of $54 million. Bloomberg also reported that, of the 54 lots in the Jan. 28 Old Masters paintings auction, only 22 sold.

The lot description frames the piece in a historical context: “The subject of a couple weighing gold belongs to the tradition popularized by Quentin Massys, Marinus van Reymerswael, and other early Netherlandish painters, for whom it was associated with the admonition in Leviticus 19:35: ‘You shall do no unrighteousness in judgment, in meteyard, in weight, or in measure.’ ”

Like many depictions of otherwise ordinary activities in European paintings of the 16th and 17th centuries, contemporary audiences understood that images like this served as a warning against greed.

This particular image was popular with contemporary audiences and was the subject of a 1760 engraving by François Basan, who added the language, “What do you wish to do with this Gold? A vain Pile, what folly! Soon you will lose your Life; Will you take your Treasure with you?”

What coins might be depicted in the painting? While the coins are not depicted with enough detail for positive identification, Jeff Starck, Coin World’s senior editor, world coins, said that the gold coins were possibly Spanish. He added, “The gold coins then in use in Belgium and the Brabant, Antwerp specifically, were many in denomination and design.” He said that identification of the silver coins is more complicated, noting, “at first glance the cross marks remind me of the Spanish colonial issues, and the Mexico City Mint was in operation from 1530s forward. That seems most likely by design and understanding of the widespread nature of their use in trade.”