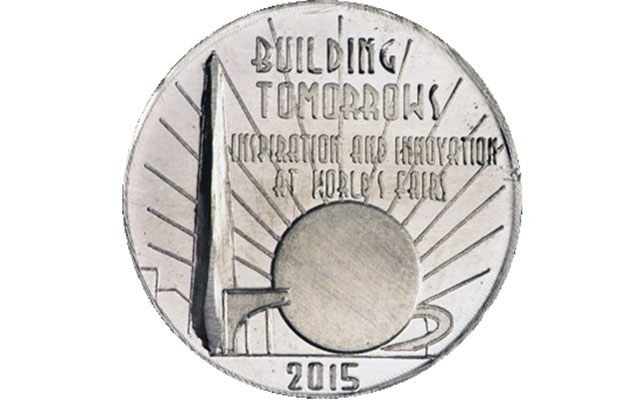 This token highlights the 2015 National Coin Week theme and was struck to inspire and celebrate numismatics. Image courtesy of the American Numismatic Society.

The following is a news release from the American Numismatic Association:

The American Numismatic Association and Edward C. Rochette Money Museum will celebrate National Coin Week, April 19-25, with a host of family-friendly activities, including an open house with free admission and special events on Saturday, April 25.

The theme for this year's event is "Building Tomorrows: Inspiration and Innovation at World's Fairs," and activities will celebrate the history of these great events and the 100th anniversary of the 1915 Panama-Pacific International Exposition in San Fransisco.

"World's Fairs have long celebrated progress and achievement, and have had a vital role in the design of money," said Andy Dickes, ANA Collections Manager. "Everyone is invited to the Money Museum on the 25th to have fun, learn something new, and take home giveaways and prizes."

The Money Museum is open Tuesday through Saturday from 10:30 a.m. to 5 p.m. Events at the Saturday open house will include:

Don't miss the chance to see the famed 1787 Brasher Doubloon, the first circulating gold coin struck for the young United States. The rare doubloon is on view at the Money Museum until July, courtesy of Monaco Rare Coins.

Every year during the third full week of April, the ANA and its members celebrate National Coin Week by letting others know about the joys of collecting and studying coins and other forms of money. To get involved in 2015 National Coin Week, call 719-482-9814, email ncw@money.org or go to NationalCoinWeek.org.