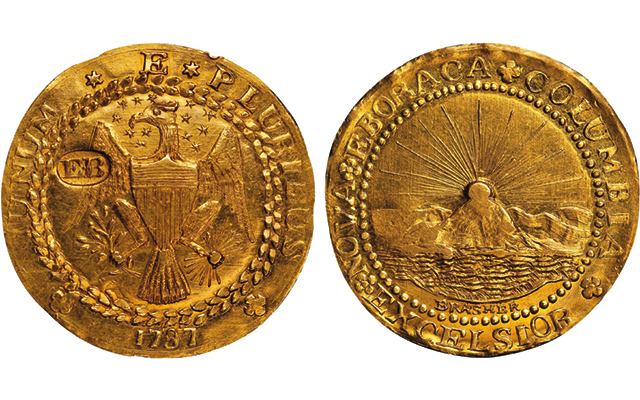 Monaco Rare Coins will display the NGC MS-63, CAC, 1787 Brasher doubloon at the ANA 2014 World’s Fair of Money in August in Rosemont, Ill. 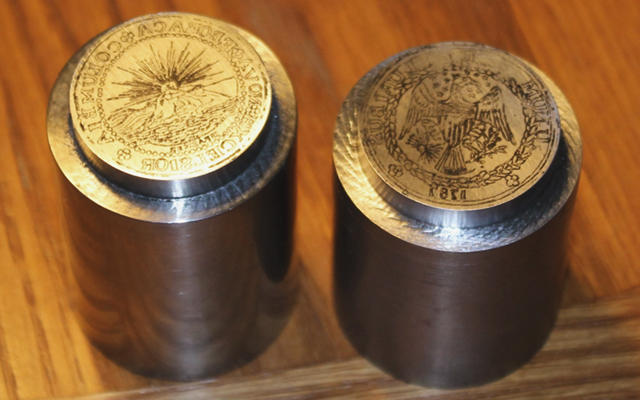 A drawing of the Brasher doubloon novodel design was transferred on each die prior to engraving by Ron Landis. 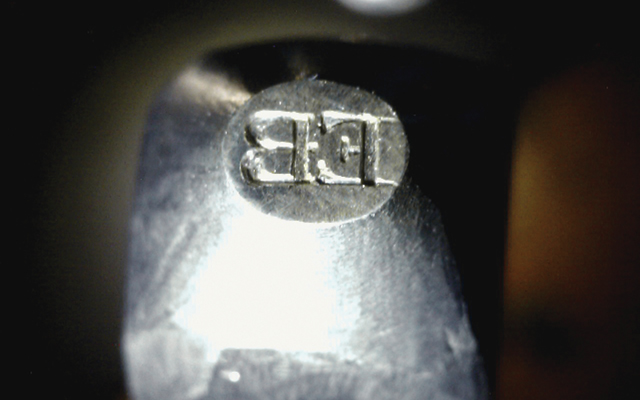 The EB punch will be used after each novodel is struck manually on a screw press.

Monaco Rare Coins has commissioned the production of up to 10,000 gold novodels replicating the designs from the genuine 1787 Brasher, EB Punch on Wing doubloon.

The sale of the replicas will coincide with the firm’s exhibit of the real coin Aug. 5 to 9 during the American Numismatic Association World’s Fair of Money in Rosemont, Ill.

The first of the novodels will be struck on a hand-operated screw press on the bourse floor of the Donald E. Stephens Convention Center, according to Monaco Vice President Adam Crum. Master engraver Ron Landis made and engraved the designs.

Collectors will have the opportunity to have Landis strike their novodel purchase for them or strike their own piece on the press, according to Crum.

The genuine Brasher doubloon to be exhibited weighs 26.4 grams and is composed of .890 fine gold, with 6 percent silver, 3 percent copper and 2 percent trace elements.

Landis said each novodel will have the same weight as the original, but be struck in .9999 fine gold and be edge-marked as such.

Crum said the purchase price for each novodel will be less than $2,000.

Landis said some modifications of the Brasher doubloon designs will be made in order to keep within the intent of the Hobby Protection Act.

Landis, from the Gallery Mint in Eureka Springs, Ark., will be demonstrating and explaining details of how he recreated the 18th century work of New York goldsmith and silversmith Ephraim Brasher.

A novodel is a coin struck from new dies that are backdated — in this case, to 1787.

ANA donation to be made

“A portion of the proceeds from sales of the Brasher Doubloon novodels will be donated to the ANA by Monaco,” Crum said. “We have a goal in mind to donate $250,000 to the ANA for many important projects the association is seeking to fund in the coming years. My hope is that our membership will enjoy these fun novodels and see them as an important resource to educate collectors about significant rarities that enhance our hobby.”

Crum said the $250,000 donation will include portions of the proceeds of sales of the Brasher doubloon novodels and from the sales for two other upcoming issues.

Crum and his business partner, Michael Carabini, bought the 1787 Brasher, Punch on Wing doubloon for $4,582,500, as the first lot in Heritage Auctions’ Platinum Night session Jan. 9. The auction was held in conjunction with the Florida United Numismatists Convention in Orlando. The purchase price included the 17.5 percent buyer’s fee.

The 1787 Brasher, Punch on Wing doubloon was last put on public display in 1987 by the doubloon’s previous owner, Chicago numismatist Walter Perschke.

Perschke purchased the doubloon for $430,000, including a 10 percent buyer’s fee, in Rare Coin Company of America’s July 27, 1979, segment of Auction ’79, where it was graded “Almost Uncirculated.” Perschke maintained ownership of the coin until it was sold in the January 2014 FUN auction.

The doubloon, now insured for $10 million, will be the marquee attraction in the ANA’s Museum Showcase at the August convention.

Visitors to the ANA Museum Showcase exhibit and the Monaco booth can obtain a complimentary, illustrated educational brochure about the Brasher doubloon.

“We will have scheduled demonstrations during the ANA convention to show how they were made,” Landis said.

The obverse design of the Brasher doubloon shows an eagle holding an olive branch and arrows. Thirteen stars are arranged around the eagle’s head representing the original 13 colonies, and the obverse motto is E PLURIBUS UNUM. Brasher’s EB punch mark appears on the wing on the left side of the coin.

The reverse design is a sun rising over a mountain in front of a sea, a symbolic representation of a new beginning. Around the design is another Latin legend, NOVA EBORACA COLUMBIA EXCELSIOR. “Columbia” was a nickname for the United States, “Nova Eboraca” translates to New York and “excelsior” is Latin for “ever higher.”

Preparation of the dies for the novodels presented Landis with challenges.

“The design itself was one of the easier pieces I’ve executed in one way, but in another way, it’s the most difficult one,” Landis said. “Brasher used a hammer and chisel to cut in the mountains and left a ribbon like pattern with parallel lines and torn steel in places. That kind of stuff really can’t be duplicated with modern technology.

“There are so many nuances in the original coin, there is absolutely no way I can copy it exactly. I’m trying to capture the look and feel of the original coin, but no matter how close I get, it would probably never fool a professional grader or numismatist, especially with the other changes like the alloy that will be different from the original coin.”

Landis said he plans to have more than one set of dies available in case there is any damage during production or demonstrations.

“The fun part to me is figuring out how the original dies were cut and duplicate the process as close as possible,” Landis said. “So I’ve spent many hours examining the actual coin and some very high resolution photographs NGC provided me with. The most time consuming part is carving the letter punches.

“From there, I try to follow Brasher’s pattern as closely as possible. I’ve already started the second obverse die since I’m not happy with my first attempt. The actual engraving part doesn’t take very long once the punches are made, so if I don’t get it right the first time, I just call it a ‘practice piece’ and grind it off and give it another go.”

Landis explains how he plans to make the planchets for the novodels, noting he’s unclear exactly how Brasher prepared his.

“The blanks for the novodels will be made in the traditional manner of casting a large ingot, then rolling the ingot into strip and cutting the blank so the weight will be the same as the original coin I am using as a model,” Landis said. “That coin weighs 26.4 grams but is of .890 fine with 6% silver, 3% copper and 2% trace elements.”

According to Landis, small “facets” on the edge of the genuine Brasher doubloon were “probably created with the rounded end of a goldsmith’s chasing hammer.”

“It’s quite possible that he cast each of his blanks individually then finished the edges in this manner to clean them up,” Landis said. “That method would be entirely undesirable for the mintage numbers we’re faced with and consistency that is expected, so I’ve figured out a way I can duplicate the look of the original coin in my hand cranked edge mill I built for this. ...”

To create a set of edge dies, Landis said he created a master in steel using the profile and texture of the genuine coin, then added the .9999 into the master edge die.

“Once that’s heat treated, I can then impress it into the working edge dies so when we roll the blanks through, they will shape, texture and add the quality mark in one stroke of the edge mill,” Landis said.

Landis says he plans to make a demonstration piece by casting a round blank and hammering it into place to show how the edge device would have been executed.

“I’ll have a bench set up at the convention so I can counterstamp the EB stamp into freshly struck pieces on the spot,” Landis said. “I’ll also show how I believe Brasher created his dies and crafted his blanks.”

The novodel design can be struck with one swing of the screw press arm, but the press “if thrown too hard can over strike the piece,” Landis said. “I like to use two strikes as a general rule for highest quality.”

The screw press will be delivering between 15 and 20 tons of pressure at the moment the dies strike the planchet, Landis said.