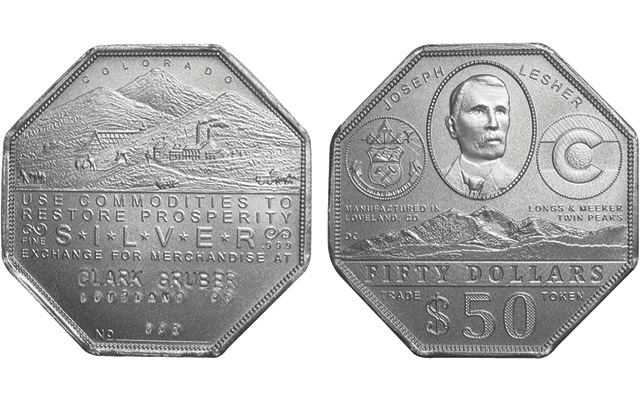 Colorado minter Daniel Carr has begun offering 2014 Lesher dollar style $50 tokens in homage to the historic issues of 1900 and 1901. The new pieces can be imprinted with private advertising or messages, as the pieces Lesher issued were. 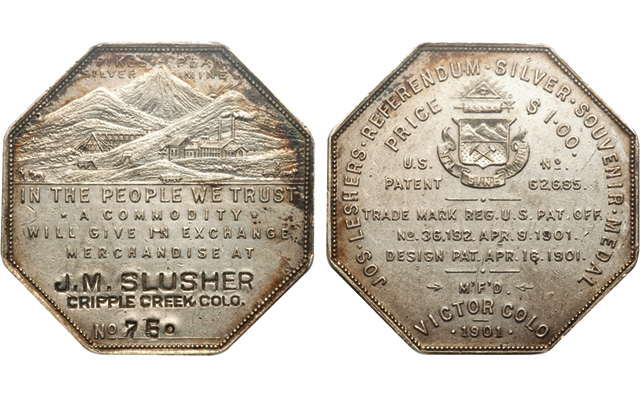 The historic Lesher Referendum dollars include $1 denominated pieces issued in 1901 with a variety of merchant inscriptions. This example was issued for J.M. Slusher of Cripple Creek, Colo., a mining town.

A Colorado minter has released modern versions of the famous Lesher dollars.

Daniel Carr and his Clark & Gruber Co. are now making Lesher dollars with a modern twist.

Ohio native Joseph Lesher became a Colorado pioneer, working in the silver mining camps of the state for more than two decades.

In 1900, in the small town of Victor, Lesher opened a private mint to produce octagonal 1-ounce silver tokens redeemable for $1.25 in current money, in a plan to open idle mines.

The private tokens were used in trade, and the 1901 issues were stamped or engraved with a merchant name and serial number on the obverse so merchants could use the pieces in their stores.

All of the Lesher Referendum dollars are rare and many are extremely so, according to A Guide Book of United States Coins, by R.S. Yeoman, edited by Kenneth Bressett.

They are also cataloged in more detail in So-Called Dollars, by Harold Hibler and Charles Kappen.

The name “Referendum dollar” relates to Lesher’s suggestion that the people should decide whether the pieces would circulate.

This was shortly after the failed Democratic bids in the 1896 and 1900 Presidential campaigns, when the ratio of silver and gold as money was a popular topic.

Carr’s modern-day “Lesher dollars” can be ordered with two lines of text, and serial numbers, imprinted.

Minter Carr said that he can accommodate about 12 characters per line, with a business name, surname, location or other text available, “just like the original imprint-type Lesher dollars.”

However, Carr reserves the right to refuse to imprint the new Lesher dollars with an inappropriate message or one already in use by others.

The modern examples are the same shape and approximately the same size as the originals (octagonal, 35 millimeters in diameter).

The historic Lesher dollars were struck from .950 fine silver, at a weight of 26.73 grams (the same as the standard silver dollar then in circulation). However, Carr’s pieces are composed of .999 fine silver and weigh “about” 27 grams, he said.

The 2014 Lesher dollars carry a symbolic $50 face value and feature a small portrait of Joseph Lesher among design elements on one side. The traditional mining scene from the older pieces is on the other side.

Each piece will be individually serial numbered, with each imprint receiving its own set of numbers beginning at 001.

Imprinted Lesher dollars are available for $75 each for the first example, with subsequent examples with the same imprint costing $40 each.

Examples without an imprint are available for $40.

Shipping and handling is a flat $10 per order, regardless of the number of tokens ordered.