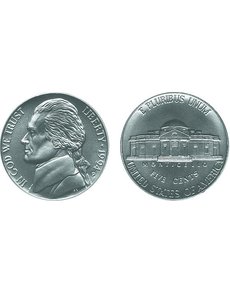 The Matte Finish 1994-P Jefferson 5-cent coin had a mintage of 167,703 pieces and was offered in Jefferson Coinage and Currency sets, which also contained an Uncirculated 1993 Thomas Jefferson commemorative silver dollar and Series 1976 $2 Federal Reserve note. The set was offered at a pre-issue price of $34 and a regular issue price of $39.

The set was supposed to be a limited-edition offering of just 50,000 sets, but this information was omitted from sales brochures, and the mintage was expanded to meet widespread collector demand.

While the Jefferson dollar honored the 250th anniversary in 1993 of his birth, delays by Congress in passing the bill moved the actual striking of the coins to 1994, although the dollars are dated 1993. Hence, the inclusion of a 1994-P Jefferson 5-cent coin in a “1993” set.

Thankfully for collectors, these Matte Finish 5-cent coins were very well-produced and their expanded mintage makes them affordable. In August, Teletrade sold an example graded by Professional Coin Grading Service Specimen 69 Full Steps for $39. Sets with original packaging can trade for as little as $60.

At the time that those coins were released, there was no mention that the 1994-P Jefferson 5-cent pieces had a special finish. The special nature of the coins was only publicized when a Coin World reader studied his coins, noticed the differences between circulation strikes, and informed Coin World, who investigated the coins and directed questions to Mint officials. The Mint later stated that the intent of the Matte Finish was to make the surfaces of the 5-cent coin match the Uncirculated Jefferson silver dollar in the set.

The Mint’s promotional literature described the process of making Matte Finish coins: “Matte Finish requires two extra steps in the minting of the coin: one, sandblasting the face of the coinage die with a mixture of glass beads and aluminum oxide and two, adding a hard chrome plate to the die for hardness and lubricity.”

Another Matte Finish Jefferson 5-cent piece would be issued in 1997, and its release resulted in a frenzy among collectors that will be addressed in next month’s column.

The Matte Finish would show up on one more regular-issue design included in a commemorative set of the 1990s, when it was used on the 1998-S John F. Kennedy silver half dollar in the Kennedy Collector’s set.