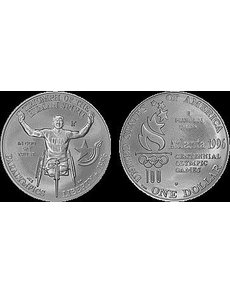 The 1996 Paralympics silver dollar issued in conjunction with the 1996 Atlanta Centennial Olympics has the lowest mintage of any modern U.S. commemorative silver dollar.

Coins devoted to Olympic themes have played a critical role in shaping the modern commemorative program of the U.S. Mint, starting with the 1984 Los Angeles Games.

The Los Angeles Games program was the second modern commemorative coinage program and consisted of two years of silver dollars of different designs and a 1984 gold $10 coin, all struck at multiple Mints. The $10 eagle was the first U.S. gold coin minted in more than 50 years and the first coin to bear the W Mint mark for West Point — factors contributing to its immediate popularity.

Sales of the 13 different 1984 Olympics coins, counting all Mints and Proof and Uncirculated versions, totaled more than 5 million coins, which raised $73 million for the United States Olympic Committee. The U.S. Mint enlisted banks to sell these coins to their customers and, according to the Treasury Department, almost 45 percent were sold to noncollectors. High mintages make these coins readily available today, the only exception being the doubled die obverse variety of the 1984-W $10 coin.

For the 1988 Seoul Games, the program consisted of a single silver dollar and one gold $5 coin featuring Nike, the winged goddess of Victory. The gold coin is often cited as one of the most artful U.S. modern coin designs. 1.9 million 1988 Olympics coins were sold yielding $23 million for the USOC. These coins lacked the hype and marketing of the 1984 Olympic series and only 24 percent were sold to noncollectors.

The 1992 Olympics inspired a commemorative series including a copper-nickel clad half dollar, silver dollar and gold $5 coin. An open design contest was held, ultimately leading to embarrassment for the Mint. After the baseball-themed dollar coin designed by John R. Deecken was issued, it became clear that the illustration had been copied in detail from the Fleer 1991 Nolan Ryan baseball card.

The two-year 1996 Atlanta Centennial Games spurred a program of unprecedented scope with the goal of raising $250 million for the USOC. Four copper-nickel clad half dollars, eight silver dollars and four gold $5 pieces were authorized — 32 coins in Proof and Uncirculated formats.

The bloated program met with little enthusiasm and the coins were among the worst selling modern U.S. commemoratives ever. In the end, only $25 million was raised for the USOC.

The glut of 1995 and 1996 Olympic coins turned collectors away from commemoratives, leading to record low sales of other 1996 and subsequent 1997 issues. Today these 1995 through 1997 issues are among the most valuable of modern commemoratives because of their paltry mintage figures, but the surcharge beneficiaries suffered from the poor sales. Clearly, something needed to change. Lawmakers responded quickly in 1996, capping the number of commemoratives that could be issued in a single year, a restriction that remains in place today.