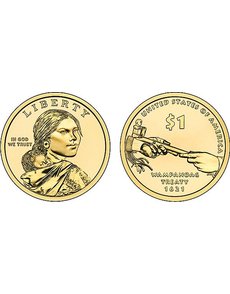 Beginning in 2009, the U.S. Mint moved the date, Mint mark and the legend e pluribus unum to the edge of the Sacagawea dollar. Shown is a 2011 Sacagawea, Native American dollar with the Wampanoag Treaty reverse.

I received my 2011 U.S. Silver Proof set from the Mint today and I find no S Mint mark on the Native American $1 coin. Is this normal or is it an error?

This question presents a good opportunity to explain the many changes that have occurred with this series.

While the possibility exists that Mr. Smith’s dollar is an error coin, he should first check the edge of the coin, as that is where the S Mint mark of the San Francisco Mint should be. The Mint’s current Proof set packaging should allow collectors to see the coin’s incused edge lettering.

From 2000 to 2008, the edges of the Sacagawea dollars were smooth, with the coins’ Mint mark and date on the obverse.

The Native American $1 Coin Act of 2007 (Public Law 110-82), however, ordered the Mint mark, date and the legend e pluribus unum (formerly found on the reverse) moved to the edge of the coins.

The new law also mandated that the Native American dollar reverse be changed annually, replacing the Soaring Eagle reverse seen from 2000 to 2008.

The act was promoted as a way to reinvigorate interest in the dollar coin, which does not typically circulate in commerce, as well as a way to honor Native American history, achievements and culture.

In addition, the denominational legend one dollar on the reverse of the coin was replaced with $1 just like the Presidential dollars of 2007 to present.

The 2010 “Iroquois Confederacy” dollar reverse depicts five arrows wrapped by a Wampum belt. The central figure on the belt, the Great White Pine, represents the Onondaga Nation. The four square symbols represent the Mohawk, Oneida, Cayuga and Seneca nations. The bundle of arrows symbolizes strength in unity for the Iroquois Confederacy.

For 2011, the Mint has issued the “Wampanoag Treaty” dollar. As the Mint’s description states, this reverse “features the hands of the Supreme Sachem Ousamequin Massasoit and Governor John Carver, symbolically offering the ceremonial peace pipe after the initiation of the first formal written peace alliance between the Wampanoag tribe and the European settlers [in 1621].”