The Joys Of Collecting: Author offers $1K for anomaly 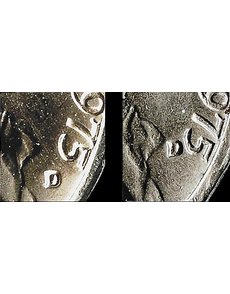 I will donate $1,000 to a numismatic nonprofit in the name of whoever first sends me a 1975-D Jefferson 5-cent coin. It has to be a certain variety and in Mint State, however. Read on!

In the Dec. 24, 2012, issue of Coin World, I noticed the Readers Ask column, “Case of the moving Mint mark,” pointing out that the 1975-D Jefferson 5-cent coin, total mintage 410,875,300, was normally found with the D Mint mark downward from the right side of the 5 of the date, but one die had the D high and between the 5 and the Jefferson portrait. This is, indeed, a common coin — the entire mintage for all 1975-D 5-cent coins is more than the total of all men, women and children in the United States!

While Mint marks vary considerably on many United States coins, including those of the 20th century, the position of the D near the portrait was extreme, at least in my view.

This piqued my curiosity, and I contacted Mike Diamond, who provided the images for the column. It turned out he had an example for sale, which I purchased for $25. It arrived in due course, is illustrated here, and is in what I would call Extremely Fine to About Uncirculated grade.

Then began a further search, including mention in one of my columns. Did someone have a roll of them? Just one other turned up. Randolph Grimes sent me an image of a worn example he owned.

As I write these words, the misplaced Mint mark 1975-D Jefferson 5-cent coin seems to be very rare, probably 400 times more so than a regular 1975-D 5-cent coin as suggested above. On the other hand, probably only a tiny fraction of people owning 1975-D 5-cent coins know of the variety. I expect other examples are waiting to be identified.

If this were to be listed in A Guide Book of United States Coins, it would become well known and, in time, its relative rarity could be confirmed. Certainly, more are around. It seems that it will remain relatively scarce.

I dreamed up this idea: I will donate $1,000 to one of three causes — the American Numismatic Association Young Numismatist program, American Numismatic Society library fund or the Smithsonian’s Dick Doty initiative — in the name of the first Coin World reader (only the first finder, who also gets to select the nonprofit to receive the money) who can supply me with a nice Mint State example of the misplaced D coin.