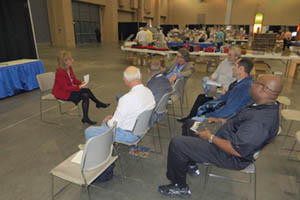 Mary S. Lhotsky, deputy associate director of Sales and Marketing at the U.S. Mint, addresses collectors during a Feb. 28 forum.

Mary S. Lhotsky, deputy associate director of Sales and Marketing at the U.S. Mint, held a Collector’s Forum on Feb. 28 during the American Numismatic Association National Money Show in Atlanta.

During the forum, she stressed that the U.S. Mint has a new vision in its sales and marketing department, focused on customer service. She said that the Mint is committed to grass-roots efforts to grow the base of people interested in coins and to get more young people involved in the hobby.

She said that an enhanced “Mint education initiative” would be introduced to help people understand why they should collect coins, and programs like Young Collector sets will be continued to educate young people about U.S. coin basics.

Lhotsky emphasized that the Mint is in “listening mode” right now and that it is going to embark on expanded surveys and outreach, “right down to the details, what we’re doing wrong and what we’re doing right.”

She said the Mint hopes to build on programs with widespread interest to casual collectors and numismatists alike — like the 2014 National Baseball Hall of Fame commemorative coin program — to help the hobby grow.

She pointed out innovations in producing sets such as the 2013 Theodore Roosevelt Coin and Chronicles set which combines two of the Mint’s current goals: to explore new packaging ideas and to re-energize the medals program.

Making it easy for consumers to order coins is a key concern at the Mint currently as it makes investments in changing its ordering system.

Lhotsky said she anticipates that the enhancements will be operational by October. Lhotsky said that she can relate to consumer problems, expressing, “It doesn’t make me happy when I have a sister’s birthday coming up and I can’t order a Happy Birthday coin set online.”

She added that many of the Mint’s special sets aren’t profit centers and that the Mint is working to develop a pricing model so as to produce products that people can afford, while also carrying an educational component.

Among other initiatives are the implementation of the Mint’s five-year strategic plan, with a focus on getting ahead of the production curve so that the Mint can deliver products when consumers want them.

When Coin World asked about what the Mint learned through the Girl Scouts of the U.S.A. Centennial commemorative coin program of 2013 (where sales failed to reach a level that would support paying surcharges to the Girl Scouts organization), Lhotsky said that the Mint was reminded that a marketing plan needs to be developed before a coin goes into production.

This plan may include an assessment of what a surcharge recipient organization can and can’t do, a plan for outreach, and a plan to feed information to potential coin buyers about a coin’s availability.

She said, “every Girl Scout in America should have known about the coin” and stressed the need to push organizations to make sure that programs are successful.

With the 2010 Boy Scouts of America program as a benchmark, she said that the U.S. Mint had perhaps assumed that the Girl Scouts would have a similar reach. ¦