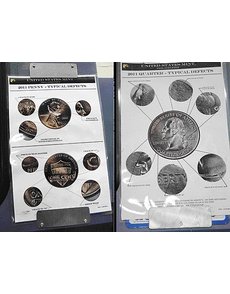 Mint technicians use these schematics to identify problem areas for the Union Shield reverse of the Lincoln cent and the obverse of the America the Beautiful quarter dollars.

The Philadelphia Mint has encountered some problems with the Lincoln cent since the Union Shield reverse was introduced in 2010.

In addition, Mint technicians face new challenges every eight to 10 weeks as each new America the Beautiful quarter dollar design goes into production.

During an Aug. 6 Coin World visit to the Philadelphia Mint, Joseph Falls, chief of the coining division, pointed out schematics posted on the cent and quarter dollar presses that illustrate die defects that could affect the quality of the coins produced.

Production employees are instructed to look for die cracks, or larger die breaks, what the Mint refers to as “piece-outs.” Die cracks or breaks will appear as raised areas of metal on the struck coin as metal flows into the recessed voids on the die left by the cracks and breaks.

For the Lincoln cent obverse, production employees are asked to look for these flaws:

? Cracks in Lincoln’s hair, down and to the right of the D in UNITED.

On the reverse, these are locations for possible types of die flaws:

? Cracks at the left part of the banner along the top of the shield.

? A crack midway on the C in CENT.

? A crack in the bottom of the O in ONE.

Each America the Beautiful quarter dollar reverse design presents a new set of die stresses when paired with the George Washington obverse.

On the Washington obverse, Mint technicians monitor for the following:

? Die breaks that may appear on the cheek, just below the crease at the tear duct of Washington’s eye.

? Die cracks in the hair.

? Die breaks to the back of Washington’s head northwest of the G in GOD.

? Die break at the bridge of the nose.

? Die break inside the R of LIBERTY.

? Die break at the truncation of the bust.

Enhancements or refinements may be made to the design features by the U.S. Mint’s engraving staff to help mitigate any striking problems that could produce undue stress on the coinage dies, according to Falls. ¦