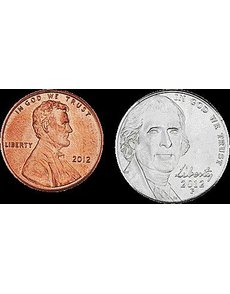 While costs for the cent and 5-cent coin remain double their face value, testing of alternatives for their metallic composition has failed to yield any recommendations.

The U.S. Mint’s report to Congress on alternative metals for circulating coinage calls for additional testing before any recommendations on replacements are made.

The findings in the report are the result of nearly two years of extensive research by the U.S. Mint into alternative metals for circulating coins.

The Treasury’s recommendation that more testing be conducted means the copper-plated zinc for the Lincoln cent, copper-nickel for the Jefferson 5-cent coin, copper-nickel clad for the Roosevelt dime and America the Beautiful quarter dollars, and manganese-brass clad for Presidential dollars will remain in use indefinitely.

The Mint’s first biennial report was submitted to the Senate Committee on Banking, Housing and Urban Affairs and House Financial Services Committee on Dec. 13. Coin World obtained a copy of the nine-page summary of the report the same day. The full report was to be publicly released Dec. 14.

The U.S. Mint constructed a dedicated research and development laboratory within the Philadelphia Mint, with Concurrent Technologies Corp. from Johnstown, Pa., overseeing the testing.

Of the 80 metals on the periodic table of elements, only aluminum, zinc, lead and iron (used to make steel) cost less than copper and nickel, the primary metals for U.S. coins, according to the report summary. CTC’s research focused solely on alloys and plated metals using aluminum, steel, zinc, copper and nickel.

Because the cost of zinc is competitive with the price of steel and aluminum, changing the composition of the cent to a formulation based on those two metals would not yield significant savings, according to the report summary.

“Additional production-scale testing is required to confirm preliminary cost estimates of all the alternatives tested, including those which may not match the electromagnetic signature of existing coins.”

The Mint’s report to Congress, submitted under provisions of the Coin Modernization, Oversight and Continuity Act of 2010, also suggests that it would be necessary to give industry two to three years advance notice before changing any composition of circulating coins.

The legislation authorizing the research and development of alternative compositions for circulating coinages was triggered by continually rising metals costs, primarily those associated with cent and 5-cent coin output. Production costs for the cent and 5-cent coin currently are approximately double their face value.

While the Mint can recommend composition changes for U.S. coinage, only Congress has the authority to change the compositions for circulating coinage. ¦