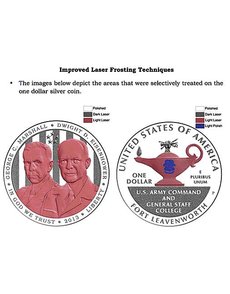 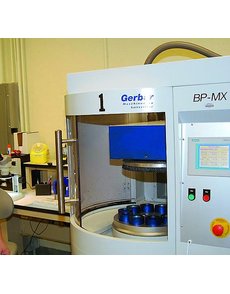 Image shows a horsehair die-polishing machine at the West Point Mint. Blue collars hold the dies (none are loaded in this photo). Then the brush spins in one direction and the dies spin and oscillate in the opposite direction. 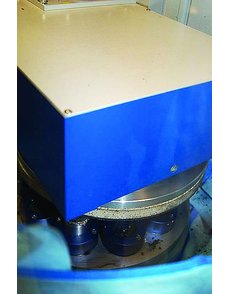 A close-up of the felt polishing machine. The pad is rotating and a die is loaded, seen in the lower left corner. The die spins in the opposite direction of the pad and oscillates laterally. 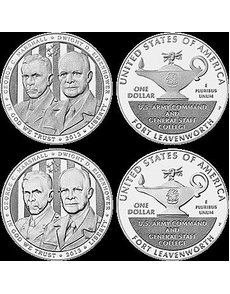 The overseer of the application of the U.S. Mint’s laser frosting technology is seeking implementation of a policy change to allow permanent internal preservation of representative prototype and test strikes for future research.

Steve Antonucci, branch manager for digital process and development based at the Philadelphia Mint, said during a telephone conference with numismatic journalists April 3 that he’d like to see a secure vault dedicated for retention of representative experimental strikes of each coin on which the laser-frosting technology is used.

“My desire is to maintain one of everything,” he said.

The primary obstacle, Antonucci said, is that the coins on which the technology is used in die production are composed of gold and silver, which would require budgeting concerns.

In most cases under current policy, prototypes and any test or experimental strikes are destroyed.

The new laser-frosting technology allows the application of different levels or intensities of frosting on specific areas of an individual coin design, to enhance the artistic quality of the U.S. Mint’s commemorative and numismatic coins, Antonucci said.

Antonucci said the integration of multiple, contrasting, laser-frosting surface finishes on details of the same coin will make those details “pop” from the rest of the design.

The Proof 2013-S 5-Star Generals copper-nickel clad half dollar is being struck using the standard Proof finish, according to U.S. Mint officials.

Laser-frosting technology is also being used in the production of the Enhanced Uncirculated 2013-W American Eagle silver dollar, which will be included in the two-coin West Point Mint 75th Anniversary set slated to go on sale May 9.

Collectors got their first look at one of the Enhanced Uncirculated coins on March 13, when James Bucki, a writer for About.com, depicted one with his blog about a recent visit to the West Point Mint, where the coins were being struck.

Bucki saw the Enhanced Uncirculated American Eagles being struck during his visit, and photographed the die-polishing equipment being used by the Mint. He provided Coin World the images of the equipment that are shown here.

Antonucci said use of the laser-frosting technology undergoing continual research and development at the Philadelphia Mint is in response to customer feedback that the frosting on Proof coins against mirrored fields is too heavy on the main design devices. The thick frosting often gives the appearance of obliterating specific design details, critics claimed.

The design details weren’t being obliterated, Antonucci said. The heavy frosting was absorbing the light in such a way as to project that appearance, he said.

Early reaction by collectors to changes to the frosting on the 5-Star Generals commemorative coinage appeared to be generally favorable, based on comments seen on at least one online forum.

Although the one silver American Eagle being struck for the two-piece West Point Mint set is referred to as Enhanced Uncirculated, Antonucci said it is, technically, a Reverse Brilliant Uncirculated coin.

Not a Proof finish

Although the Enhanced Uncirculated American Eagle has some characteristics similar to those on Proof coins — it contains frosted surfaces and was struck more than one time — the Mint is not considering it a Proof coin.

According to U.S. Mint officials, in an April 3 statement: “Most of our premium coins, both Uncirculated and Proof, are struck multiple times on specially prepared dies. Therefore, using the number of strikes is not always an indicator of what is Proof and what is Uncirculated.

“The horsehair brush automated process creates a reflective surface of artwork elements but cannot achieve a smoothness of the felt pad. The felt pad cannot polish relief and is generally used to polish the field of a proof die, resulting in a mirror like finish.

“The auto polishing with a horsehair brush results in a Brilliant Uncirculated finish. The dies then go through a laser-frosting process to achieve a heavy laser frost or a light laser frost in areas as described above.”

Three months ago, Antonucci said, he and his team were exploring alternative finishes and polishing techniques designed to enhance the artistic features of each coin design.

Experimental strikes were made of the Proof versions for each of the three denominations and compositions of the 2013 5-Star Generals commemoratives, both using standard Proof techniques and, on separate examples, employing the laser-frosting technology.

Antonucci said he brought examples of each of the coins struck with dies produced using the two respective processes to the March 11 meeting of the Citizens Coinage Advisory Committee.

CCAC members quickly recognized the noticeable differences between the coins, applauded the efforts and inquired “what’s next” for collectors to expect, Antonucci said.

The Proof 5-Star Generals half eagles and silver dollars being struck and shipped to purchasers are being struck with dies prepared using the new laser-frosting technology, Antonucci said.

None of the 5-Star Generals prototypes or experimental pieces produced are being made available to collectors. Whether any will be retained for future research and development reference or all destroyed has not been determined, Antonucci said.

Antonucci said that Mint officials are seeking to maintain a sustainable, cost-efficient process by employing the laser-frosting technology.

The Mint’s senior sculptor-engraver, Donald Everhart II, heads a team working with Mint headquarters officials on design approval and what elements should be polished, and what should be frosted and at what intensity level, Antonucci said.

Antonucci said he sent four or five different versions of experimental strikes of the commemorative coins to Mint headquarters for official approval of which version was most suitable.

The various techniques in combination will be customized to any coin design on which they are used, Antonucci said.

The laser-technology will also be considered for use on Mint medals, he said.

Antonucci said the primary challenges he and his team are facing in 2013 and 2014 are extending and maintaining high die life for dies prepared with the laser-frosting and polishing techniques, and raising the relief on the each coin to further enhance the designs.

The Mint has conducted digital analysis of selected coinage dies to identify any problems or stresses that will reduce die life, Antonucci said. ¦