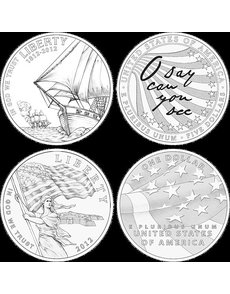 Approved designs for the 2012 Star-Spangled Banner gold $5 half eagle and silver dollar were made public Dec. 14 by U.S. Mint Deputy Director Richard A. Peterson.

Designs given final approval by Treasury Secretary Timothy F. Geithner for the 2012 Star-Spangled Banner gold $5 half eagle and silver dollar were unveiled Dec. 14 by the U.S. Mint.

“From the perilous naval engagement in the harbor with the Stars and Stripes waving above Fort McHenry, to the opening line of our national anthem dramatically depicted in Francis Scott Key’s handwriting, these gold and silver coins capture iconic symbols of the Battle of Baltimore, a critical conflict in the war to preserve our liberty,” Deputy Mint Director Richard A. Peterson said Dec. 14.

Proof and Uncirculated versions of both coins will be offered to collectors. No date has been announced for commencement of sales nor has the Mint released pricing for ordering options.

The Star-Spangled Banner Commemorative Coin Act (Public Law 111-232) calls for the production and issuance of up to 100,000 gold half eagles and 500,000 silver dollars to commemorate the bicentennial of the writing of the U.S. national anthem.

The price of each gold coin will include a $35 surcharge, while each silver dollar’s price will incorporate a $10 surcharge. After the U.S. Mint recoups all of its production costs, all remaining surcharges are authorized to be paid to the Maryland War of 1812 Bicentennial Commission. The commission is to use these funds to support its bicentennial activities, educational outreach, and preservation and improvement of the sites and structures related to the War of 1812.

The enabling act requires that the coins’ designs be emblematic of the War of 1812, particularly the Battle of Baltimore that formed the basis for the lyrics of “The Star-Spangled Banner.”

The obverse of the gold half eagle is emblematic of the theme “The Battles at Sea During the War of 1812.” The approved design depicts a naval battle scene from the War of 1812, with an American sailing ship in the foreground and a damaged and fleeing British ship in the background. The obverse was designed by U.S. Mint Artistic Infusion Program Master Designer Donna Weaver and sculptured by U.S. Mint Medallic Sculptor Joseph F. Menna.

The half eagle’s reverse design is emblematic of the theme “The Star-Spangled Banner” (the song). The approved design depicts the first words of the national anthem, O SAY CAN YOU SEE, in Francis Scott Key’s handwriting against a backdrop of 15 stars and 15 stripes, representing the Star-Spangled Banner flag. The reverse was designed by AIP Master Designer Richard Masters and sculptured by Menna.

The silver dollar’s obverse design is emblematic of the theme “The Battle of Baltimore at Fort McHenry.” The design depicts Lady Liberty waving the 15-star, 15-stripe Star-Spangled Banner flag, with Fort McHenry in the background. The obverse was designed by AIP Master Designer Joel Iskowitz and sculptured by U.S. Mint Medallic Sculptor Phebe Hemphill.

Check the U.S. Mint website at www.usmint.gov for updates on a release date and pricing for the Star-Spangled Banner commemorative coins. ¦