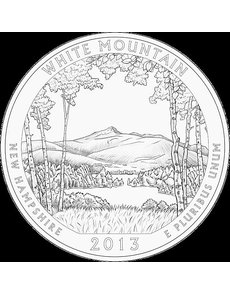 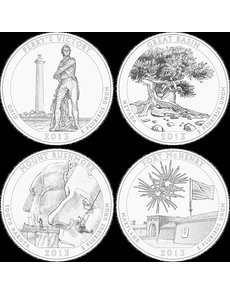 Final design sketches approved for the five America the Beautiful quarter dollars to be released during 2013 were revealed Dec. 10 by the United States Mint.

The design for the White Mountain National Forest quarter dollar depicts Mount Chocorua, framed by birch trees. The mountain is the easternmost peak of the Sandwich Range.

The design was created and sculptured by U.S. Mint Medallic Sculptor Phebe Hemphill.

Master Commandant Oliver Hazard Perry, with the Peace Memorial located in the distance, appears on the reverse of the Perry’s Victory and International Peace Memorial quarter dollar. The monument is located in the village of Put-in-Bay, on South Bass Island, an Ohio island in Lake Erie, near where Perry’s naval squadron defeated British naval forces in a decisive battle during the War of 1812.

The design was created and sculptured by U.S. Mint Sculptor-Engraver Donald Everhart II.

The Great Basin National Park adopted design depicts the beauty and unique qualities of a single bristlecone pine tree and the rocky glacial moraines where the trees grow. These trees grow at higher elevation in the park and are believed to be the world’s oldest living single organisms. The park contains numerous bristlecone pine groves with trees more than 4,000 years old.

Menna’s design captures the site during the “Defenders Day” celebration, considered the centerpiece annual event held at Fort McHenry. The fireworks symbolize the “rockets’ red glare,” linking the fort to its historic past.

Menna was inspired by photos showing men adding the final details to Thomas Jefferson’s face on the memorial. Menna’s design is distinctly different from four previous U.S. coin renditions, and offers a unique and educational perspective on how Mount Rushmore was created and sculpted.

The 2013 coin will be the third program in 22 years depicting the Mount Rushmore National Memorial on United States coins.

Separate renditions of the memorial appear on the obverses of the 1991 Mount Rushmore 50th Anniversary copper-nickel clad half dollar, silver dollar and gold $5 half eagle. Mount Rushmore was again recognized in 2006 with a quarter dollar issued under the 50 State Quarters Program.

Dates have been announced for releasing each of the five 2013 America the Beautiful quarter dollars into circulation through the Federal Reserve.

The circulation release dates, states where honored sites are located, the sites honored and dates of congressional recognition of the sites follow:

Details have not yet been released by the U.S. Mint concerning the official quarter dollar launch and roll exchange and coin forum associated with the release of the White Mountain National Park quarter dollar. ¦