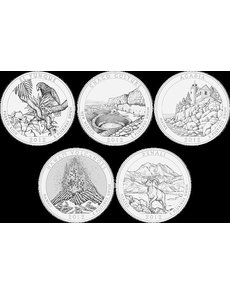 Final designs were announced Dec. 8 by the U.S. Mint for 2012 America the Beautiful quarter dollars for the Commonwealth of Puerto Rico, and the states of New Mexico, Maine, Hawaii and Alaska.

Designs for the reverses of the 2012 America the Beautiful quarter dollars given final approval by Treasury Secretary Timothy F. Geithner were disclosed Dec. 8 by U.S. Mint officials.

The final designs were selected from among 24 total designs reviewed by the Commission of Fine Arts and the Citizens Coinage Advisory Committee in 2010.

? The design for the El Yunque National Forest quarter dollar depicts a coqui tree frog sitting on a leaf and, in the background, a Puerto Rican parrot behind an epiphyte plant, and other tropical flora. It was designed by U.S. Mint Artistic Infusion Program Master Designer Gary Whitley and sculptured by U.S. Mint Medallic Sculptor Michael Gaudioso. The design was recommended by both the CFA and CCAC. The coins is scheduled for Jan. 23 circulation release.

? The Chaco Culture National Historical Park coin will illustrate a view to the west of two elevated kivas that are part of the Chetro Ketl Complex. The design also shows the north wall of Chetro Ketl and the north wall of the canyon. It was designed by AIP Master Designer Donna Weaver and sculptured by U.S. Mint Medallic Sculptor Phebe Hemphill. The design was recommended by CFA; CCAC members recommended none of the original four proposed designs. The coin is set for an April 2 circulation release.

? The Acadia National Park coin will depict a view of the Bass Harbor Head Lighthouse and Acadia’s rough coastline. It was designed by AIP Associate Designer Barbara Fox and sculptured by U.S. Mint Medallic Sculptor Joseph F. Menna. The design was recommended by both the CFA and CCAC. It is scheduled for June 11 circulation release.

? The Hawai’i Volcanoes National Park quarter dollar will depict an eruption on the east rift of Kilauea Volcano. The coin was designed and sculptured by U.S. Mint Sculptor-Engraver Charles L. Vickers. Vickers’ design was recommended by both the CFA and CCAC. It is scheduled for circulation release on Aug. 27.

? The Denali National Park and Preserve coin will depict a Dall sheep with Mount McKinley rising in the background. The coin was designed by AIP Master Designer Susan Gamble and sculptured by U.S. Mint Medallic Sculptor Jim Licaretz. It was recommended by both the CFA and CCAC. The coin is scheduled for a Nov. 5 circulation release. ¦