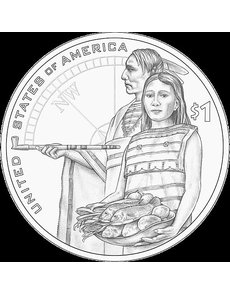 The reverse of the 2014 Native American dollar will feature a design by U.S. Mint Artistic Infusion Program Master Designer Chris Costello under the theme “Native Hospitality Ensured the Success of the Lewis and Clark Expedition.”

The reverse design selected by Acting Deputy Treasury Secretary Mary Miller for the reverse of the 2014 Native American dollar was released Oct. 22 by the U.S. Mint.

The theme for the design is “Native Hospitality Ensured the Success of the Lewis and Clark Expedition.”

The design’s background reflects a stylized image of the face of Capt. William Clark’s compass, highlighting the northwest quadrant that the Lewis and Clark Expedition explored.

U.S. Mint Medallic Sculptor Joseph F. Menna is sculpturing Costello’s design. The designer’s initials of both artists will appear on the reverse.

The 2014 reverse is being paired with sculptor Glenna Goodacre’s Sacagawea design, introduced in 2000.

The Native American dollars are being struck in Proof and Uncirculated quality for inclusion in numismatic collector sets, and in circulation quality to be offered in bags and rolls as numismatic products at prices above face value.

None of the circulation quality Native American dollars are being produced for general circulation distribution.

The approved 2014 Native American dollar coin reverse is the one the Citizens Coinage Advisory Committee recommended. The Commission of Fine Arts had recommended another design, one showing an Indian chief giving Meriwether Lewis critical advice on how to cross the Rocky Mountains on his and William Clark’s expedition through the newly acquired Louisiana Purchase. ¦