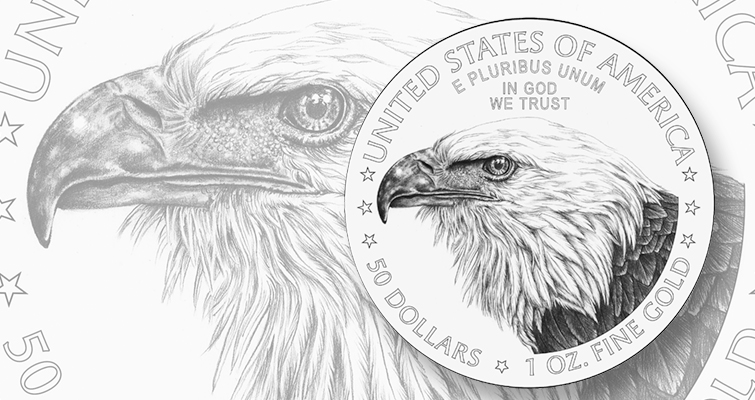 The design to be introduced in mid-2021 for the reverse of the American Eagle gold coin will feature the head of an eagle portrait. 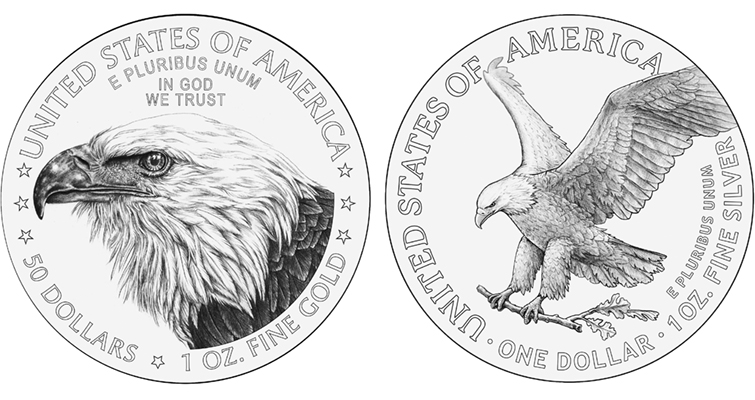 The United States Mint on Oct. 1 unveiled the new reverse designs for the 2021 American Eagle gold and silver coins. The designs are scheduled to appear in midyear, with Mint officials thus far silent on how the design transition will be conducted before the new coins are released.

The American Eagle gold coin will depict an eagle’s head in close-up; the Citizens Coinage Advisory Committee recommended a similar design for the reverse of the silver coin, principal differences being with the inscriptions, including placement of the mottoes.

The year 2021 marks the 35th Anniversary of the American Eagle Coin Program, and the new designs will begin appearing on these coins in midyear 2021, according to the Mint.

“These beautiful designs build on the United States Mint’s heritage of artistic excellence and fortify the American Eagle Coin Program’s status as an icon in the numismatic and art worlds,” said Mint Director David J. Ryder.

According to the Mint, Norris, a former volunteer raptor handler, drew inspiration for her design from her deep connection with wildlife and noted that, “The American Eagle is such a noble bird. I was hoping to capture the intensity of his stare through the close cropping. His gaze speaks of pride and wisdom passed down through generations of time.”

The silver coin’s design depicts a single eagle coming in for a landing, carrying an oak branch as if to add it to a nest, according to the Mint. AIP designer Emily Damstra created the design, which was sculpted by Mint medallic artist Michael Gaudioso before his retirement.

Reflecting on her design, Damstra commented: “My inspiration for this design grew from a desire to show our national bird — with all of the values it embodies — in a unique way that could also convey traits such as diligence, cooperation, care, and protection.”

The announcement that the new designs would not be introduced until mid-2021, possibly setting up the creation of two distinct design types (Mint officials are so far mum) for the year, might be considered something of a surprise. A major design change of this kind might be expected to be introduced at the start of the year. However, if the Mint splits production between two different designs, each for a limited period of time, that could affect the numbers of the bullion coins of both designs the Mint’s authorized purchasers order.

The obverses of the redesigned American Eagle gold and silver coins “will continue to bear versions of the historic designs that have been featured on these coins for more than three decades. The gold coin obverse will display a refreshed depiction of the 1907 design by renowned sculptor Augustus Saint-Gaudens, while the obverse of the silver coin will display a refreshed depiction of the 1916 ‘Walking Liberty’ design by famed sculptor Adolph A. Weinman,” the Mint said.

Previously, Mint officials had said that only the bullion coins would get design changes in 2021; numismatic designs would not be changed until 2022.

The press release did not address one prime impetus for the Mint’s design changes: security enhancements to the designs. 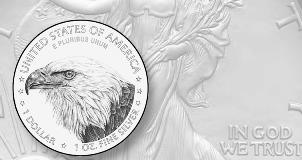 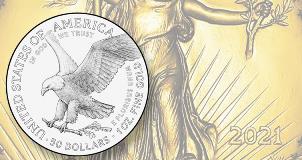