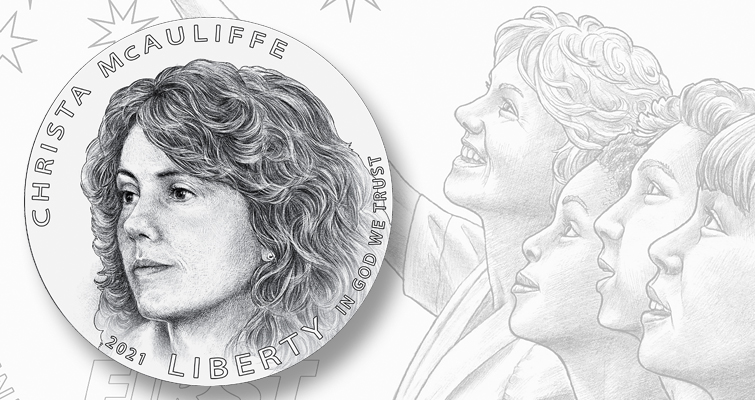 Approved obverse and reverse designs for the 2021 Christa McAuliffe commemorative silver dollar have been released by the U.S. Mint.

Approved obverse and reverse designs for the 2021 Christa McAuliffe commemorative silver dollar have been released by the U.S. Mint.

No issue date is yet posted on the Mint’s 2021 numismatic product schedule.

McAuliffe was the first teacher astronaut and one of the crew of seven members killed when the space shuttle Challenger broke apart 73 seconds into its flight on Jan. 28, 1986.

The enabling act, Public Law 116-65, calls for the production and release of 350,000 silver dollars combined with Proof and Uncirculated finishes.

Both versions of the commemorative silver dollar are scheduled to be struck at the Philadelphia Mint and bear the facility’s P Mint mark.

The approved coin designs are those favored by the McAuliffe family.

The obverse design features a portrait of McAuliffe “with a hopeful gaze and the inscriptions CHRISTA McAULIFFE, 2021, LIBERTY, and IN GOD WE TRUST.

Damstra’s design depicts McAuliffe “as a teacher, smiling as she points forward and upward, symbolizing the future. Three high school-age students look on with wonder. The seven stars pay tribute to those who perished in the Challenger tragedy.

Around the border are the inscriptions I TOUCH THE FUTURE. / I TEACH., E PLURIBUS UNUM, ONE DOLLAR, and UNITED STATES OF AMERICA.

The FIRST organization logo is included in the design. FIRST, a New Hampshire based organization named from the acronym for “For Inspiration and Recognition of Science and Technology,” founded in 1989, promotes interest in science and technology among youth.

McAuliffe was a social studies teacher at Concord High School in Concord, New Hampshire. In 1985, McAuliffe was selected to be the first participant in NASA’s Teacher in Space program.

Each coin will carry a $10 surcharge in its purchase price. Net surcharges, after the U.S. Mint recoups all production and associated costs, are to be paid to the FIRST robotics program, for the purpose of engaging and inspiring young people, through mentor-based programs, to become leaders in the fields of science, technology, engineering, and mathematics. 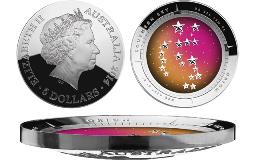 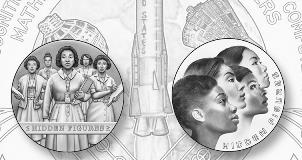