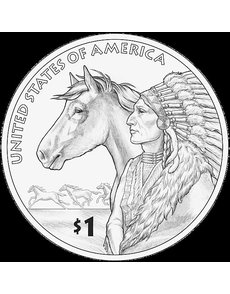 The equine design approved by Treasury Secretary Timothy F. Geithner for the reverse of the 2012 Native American dollar keeps with the theme “Trade Routes in the 17th Century.”

The design approved by Treasury Secretary Timothy F. Geithner for the reverse of the 2012 Native American dollar coin was unveiled Nov. 25 by U.S. Mint officials.

The theme for the design is “Trade Routes in the 17th Century.”

In keeping with the coin’s theme, the 2012 reverse design features a Native American and horse in profile, with horses running in the background, representing the historical spread of the horse.

The design, one of 13 presented by the Mint to the Commission of Fine Arts and Citizens Coinage Advisory Committee for their review, was recommended by the CFA on June 16 and the CCAC on June 27.

Before review by the CFA and CCAC, the 13 proposed designs were reviewed by the Congressional Native American Caucus, the Senate Committee on Indian Affairs and the National Congress of the American Indian, according to Ron Harrigal, acting chief engraver and division chief for new products and development at the United States Mint.

The obverse design of the Native American dollar retains the familiar Sacagawea design by sculptor Glenna Goodacre that has appeared on the dollar coin since 2000.

Inscriptions on the obverse are LIBERTY and IN GOD WE TRUST. The coins are minted in the distinctive golden color with the date, Mint mark and E PLURIBUS UNUM incuse on the edge. ¦