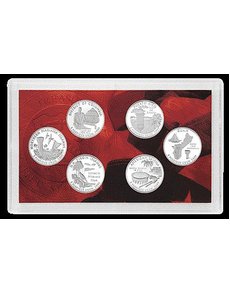 Future Silver Proof sets, like this one showing the 2009 District of Columbia and U.S. Territories quarter dollars, could contain coins composed of .999 fine silver rather than the current .900 fine silver if a Mint proposal is adopted.

Switching the fineness of silver in the annual Silver Proof sets and America the Beautiful Quarters Silver Proof set to .999 from the current .900 would produce significant savings in refining and manufacturing costs for the U.S. Mint, according to spokesman Michael White.

The move would also open the pool to additional blank vendors, White said.

President Obama’s proposed Fiscal Year 2013 federal budget includes a provision to amend Title 31, Section 5112, so that the dime, quarter dollars and half dollars in the various Silver Proof sets would be required to be composed of no less than 90 percent silver, rather than precisely 90 percent silver.

“The big picture is that fabricators that work with .999 fine silver blanks must charge us more to refine to 90/10 fineness,” White said, referring to the current 90 percent silver, 10 percent copper alloy used for the dime, quarter dollar and half dollar in the sets. “We expect minor cost reductions from consolidating purchasing, die life improvements and freight savings, but, most importantly, the change would give us the opportunity to expand our supplier base. Of course, prices will reflect the increased silver content of the coins.”

Mint officials are not only searching for cost savings, but more uniformity in the annual silver products, according to White. Currently, American Eagle silver coins are .999 fine as mandated under the authorizing Title II, Liberty Coin Act, of the Statue of Liberty-Ellis Island Commemorative Coin Act, Public Law 99-61, enacted July 9, 1985.

The 5-ounce silver versions of the America the Beautiful quarter dollars are .999 fine as mandated by law (the 24.3-millimeter coins in the Silver Proof sets are .900 fine).

Commemorative silver dollars are .900 fine, as mandated under the authorizing act for each respective commemorative coin program.

The Silver Coins Proof Set Act of 1990, Public Law 101-585, authorized the production of annual Proof sets with .900 fine silver coins in denominations from the dime and higher. The cent and 5-cent coins would remain in their respective copper-plated zinc and copper-nickel compositions. The highest denomination struck for circulation at the time was the half dollar.

The last .900 fine silver coins struck for circulation were dated 1964.

The first Silver Proof sets stemming from the 1990 act weren’t produced until 1992 because of the Mint’s difficulty in obtaining sufficient .900 fine silver blanks.

The 1990 act was amended Nov. 6, 2000, by the United States Mint Numismatic Coin Clarification Act of 2000, Public Law 106-445, sec. 2(a), to eliminate the requirement that dollar coins in these sets be composed of 90-percent silver. The Sacagawea dollar coins from 2000 to 2008, the Native American dollars of 2009 to date, and the Presidential dollars of 2007 to date have all been composed of manganese-brass clad.

The Mint has offered multiple different Silver Proof sets since the program began in 1992.

In addition, the U.S. Mint has offered the standard Silver Proof set every year since 1992.

While the U.S. Mint has not conducted any trial strikes on .999 fine silver blanks in circulating coin sizes, Mint officials are confident that production of the coins would not cause problems. “Since we have experience striking some 40 million silver [American] Eagles every year in .999 silver, we would not anticipate any issues,” White said.

The Mint has also not produced silver test strikes in conjunction with the Mint’s contracted alternative materials study with Concurrent Technologies from Johnstown, Pa., since that study is limited to circulation coinage alternatives.

White said the sourcing of blanks, blank availability and production scheduling would determine when the Mint could implement the silver fineness change should the proposed FY 2013 federal budget pass with the revision intact. ¦