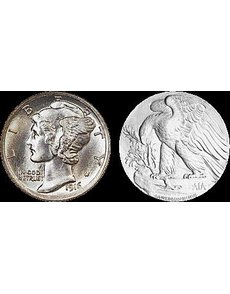 Sculptor Adolph A. Weinman designed the Walking Liberty half dollar introduced in 1916 for circulation. Shown are one set of models for a pattern executed by Weinman as he worked on refining the designs.

U.S. Mint officials expected to offer a second solicitation in late January for a contract to explore the feasibility of an American Eagle 1-ounce palladium bullion coin.

The original contract was scrapped in December because of problems in the procurement process.

“The statute requires the United States Mint to obtain the study services from ‘a reputable, independent third party,’ ” according to a statement released Jan. 13 by U.S. Mint spokesman Michael White. “After we awarded the [original] contract, the United States Mint realized that the vendor had accepted palladium industry sponsorship for prior surveys and reports.

“Accordingly, we decided to terminate the contract for the convenience of the government and resolicit the work with an appropriate conflict of interest provision.”

The $49,000 contract was originally awarded Sept. 30, 2011, to the British-based Thomson Reuters’ GFMS, one of the world’s leading economics consultancies in precious metals, specializing in research into the global gold, silver, platinum and palladium markets.

The independent marketing study to determine the demand for palladium bullion coins as investments is mandated under the American Eagle Palladium Bullion Coin Act of 2010, Public Law 111-303, signed into law by President Obama on Dec. 14, 2010.

According to the Mint’s April 13 Request for Information, posted online at Fedbizzops at www.fbo.gov/, once the contract was awarded, it was anticipated that it would take no longer than 90 days to complete the study.

White said the contract was canceled before the study could be completed.

Legislation for American Eagle Palladium Bullion Coin Act of 2010, which was introduced by Rep. Denny Rehberg, R-Mont., requires that the Treasury secretary mint and issue 1-ounce .9995 fine palladium bullion coins with a $25 face value not more than one year after the submission of the study to the Treasury secretary and to Congress.

Public Law 111-303 grants the Treasury secretary authority to issue both Proof and Uncirculated versions of the palladium coins in addition to the bullion coins. The Proof and Uncirculated coins would both be considered numismatic products to be directly sold to the public. The bullion coins would be sold through a network of authorized distributors.

The authorizing act also permits the finish of the Proof and Uncirculated versions to be changed annually in subsequent years following the inaugural release.

The act mandates the palladium American Eagle to have an obverse that is a high-relief rendition of the obverse of the Winged Liberty Head dime (1916 to 1945), and a reverse depicting a high-relief rendering of the reverse of the American Institute of Architects gold medal, introduced in 1907. Both the original coin and medal designs are the work of American sculptor Adolph A. Weinman.

If the Treasury secretary opts to approve production of an Uncirculated version, according to Public Law 111-303, “the Secretary shall, to the greatest extent possible, ensure that the surface treatment of each year’s Proof and Uncirculated version differs in some material way to the previous year.”

While the Proof version would be struck only at the West Point Mint with the W Mint mark, an Uncirculated version of a palladium American Eagle could be produced at any of the remaining three Mint production facilities — Philadelphia, San Francisco and Denver.

The metal to be procured for the contracted production of planchets for the palladium coins must be purchased from “palladium mined from natural deposits in the United States, or in a territory or possession of the United States, within 1 year after the month in which the ore from which it is derived was mined,” according to Public Law 111-303.

“If no such palladium is available or if it is not economically feasible to obtain such palladium, the Secretary may obtain palladium for palladium coins described in paragraph (12) of subsection (a) from other available sources.”

Currently, the United States has only one primary palladium producer, the Stillwater Mining Co., which operates two mines in southern Montana. ¦