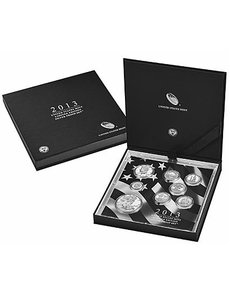 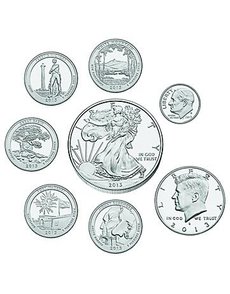 The U.S. Mint’s Dec. 12 launch of a 2013 Limited Edition Silver Proof set will coincide with the debut of the Mint’s new website waiting room feature.

The waiting room feature is designed to improve customer experiences during sales of high-demand products.

The 2013 Limited Edition Silver Proof set combines the Proof 2013-W American Eagle 1-ounce .999 fine silver dollar with the seven .900 fine silver coins that are also included in the standard 2013-S Silver Proof set. The new set is limited to a maximum of 50,000 eight-coin sets and will be offered at $139.95 per set.

The Mint is placing no restrictions on the number of 2013 Limited Edition Silver Proof sets any one household may order.

The Proof silver American Eagle in the set is struck at the West Point Mint in New York. The Proof Roosevelt dime, Kennedy half dollar and America the Beautiful quarter dollars in the set are struck at the San Francisco Mint.

The Proof 2013-W American Eagle silver dollar was previously offered separately for $52.95, but the option is reported by the U.S. Mint as sold out. As of press time, the Mint reported unaudited sales of 868,520 coins.

U.S. Mint spokesman Michael White said Dec. 5 that sales figure does not include the maximum 50,000 2013-W American Eagles being made available in the 2013 Limited Edition Silver Proof set.

The 2013 coins included in any sets sold by the Mint cannot be struck after Dec. 31, 2013, although the numismatic product options, at the Mint’s discretion, can be sold into 2014 if product remains.

At the Mint’s website, an online waiting room is being employed, designed to alleviate website slowdowns and crashes that can occur when a high-demand product is released, according to Mint officials. The waiting-room feature will be used on a product-by-product basis.

The waiting room concept was tested with customers, according to U.S. Mint officials, and received positive responses.

At 11:45 a.m. Eastern Time Dec. 12, the Mint’s catalog website will be closed to customers for all products. “Customers who enter the Mint’s website during this time will enter the pre-launch waiting room,” according to the Mint.

“Customers who come to the online catalog during a high-demand product release can enter the waiting room to ‘get in line’ to enter the website and make their purchase,” according to U.S. Mint officials. “The waiting room will tell customers how long they have to wait before entering the catalog website. While in the waiting room, they may open other tabs in their browser or another browser window to visit other websites.”

The option exists for customers to leave the website and come back later to shop when the site has less traffic, but by doing so, customers will lose their place in line when closing the waiting room browser window.

Orders for the 2013 Limited Edition Silver Proof set will be accepted at the bureau’s online catalog at www.usmint.gov/catalog or by telephone at 1-800-872-6468.

Hearing- and speech-impaired customers with TTY equipment may order by calling 1-888-321-6468.