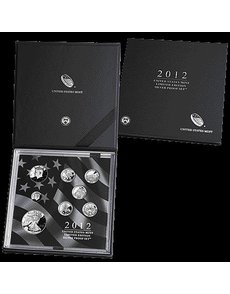 A new 2012 packaging option to be introduced Nov. 27 by the U.S. Mint is the 2012 United States Mint Limited Edition Silver Proof set.

Sales are set to start at noon Eastern Time.

On Nov. 19, the Mint website indicated the limited-edition packaging option was expected to be shipped beginning in the spring of 2013, but on Nov. 20, the language was changed to state: “Expect a delay in shipping. Additional information to be provided shortly.”

The individual Proof 2012-W American Eagle .999 fine silver coin has sold out in that single-piece option, but remains available in this and one other set. The other silver Proof coins in the set are also available in other products.

Hearing- and speech-impaired customers with TTY equipment may place orders by calling 888-321-6468.

The standard shipping fee of $4.95 per order will be in effect on all orders. ¦