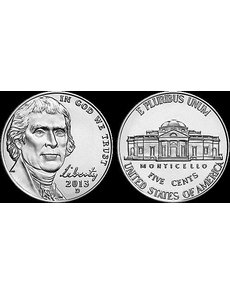 The current Jefferson 5-cent coin, which costs nearly double its face value to produce and release into circulation, is composed of the same homogenous copper-nickel alloy introduced for the denomination in 1866. 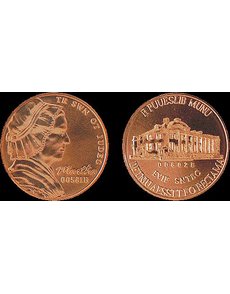 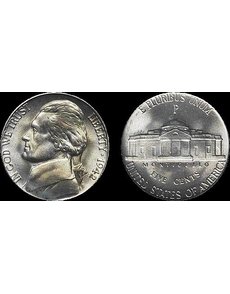 The only time the U.S. Mint has changed the alloy for the 5-cent denomination since its introduction in 1866 was late in 1942 when the composition was switched from 75 percent copper, 25 percent nickel, to an alloy of 56 percent copper, 35 percent silver and 9 percent manganese.

In efforts to save money by finding suitable alternative compositions for circulating coinage, the U.S. Mint is considering, among its options, changing the 5-cent coin from its current copper-nickel alloy to the same composition as the current Lincoln cent.

The experimental copper-plated zinc strikes the Mint has executed at the Philadelphia Mint for the 5-cent coin weigh 4.06 grams and maintain the coin’s current diameter, according to U.S. Mint officials.

For the 5-cent coin, a 75 percent copper, 25 percent nickel homogenous alloy has been used since the denomination was introduced in 1866, with only one interruption. The only period the copper-nickel alloy was not used was from 1942 to 1945 when nickel was removed and replaced with silver and manganese to alloy with copper.

The wartime alloy was 56 percent copper, 35 percent silver and 9 percent manganese. The wartime 5-cent coins also weighed 5 grams. The .350 fine silver 5-cent coins were struck at the Philadelphia, Denver and San Francisco Mints. The Mint mark from each facility appears on the coin’s reverse in the field above Monticello’s dome.

The Philadelphia Mint wartime 5-cent coin strikes represented the first use of the P Mint mark on a U.S. coin.

The copper-plated zinc planchets for the 5-cent denomination experimental strikes are being struck with what the U.S. Mint refers to as “nonsense dies” to test the alloy. The dies bear an obverse portrait of Martha Washington facing right, and the reverse, a rendition of the Washington home, Mount Vernon, in Virginia. The Mint has used variations of these two designs for decades when testing new compositions for circulating coinage.

The Research and Development Team at the Philadelphia Mint has been conducting test strikes using nonferrous and ferrous metals for more than three years in ongoing, congressionally authorized experiments aimed at reducing production and circulation distribution costs for U.S. coinage.

The testing is being conducted under the authority of the Coin Modernization, Oversight, and Continuity Act of 2010, Public Law 111-302, which calls for the Mint to examine the compositions for all circulating coin denominations.

However, the primary focus of research and development efforts has been concentrated on the cent and 5-cent denominations, both of which have cost the Mint more than face value to produce and distribute for eight consecutive fiscal years.

Under terms of Public Law 111-302, signed into law Dec. 14, 2010, the U.S. Mint must submit a report to Congress every two years updating Congress on alternative coin composition research and providing potential recommendations.

No cost savings likely for cent

Although the first report to Congress by the Mint included details about a possible copper-plated steel alternative for the Lincoln cent, the option offered no cost savings. Deputy U.S. Mint Director Richard A. Peterson has previously stated that currently no known composition alternative for the Lincoln cent would bring the combined production and circulation costs per coin below the face value of one cent.

Production of copper-nickel clad Kennedy half dollars in circulation quality has been restricted to numismatic product sales since 2002. Treasury Secretary Timothy F. Geithner suspended Presidential dollar production for circulation on Dec. 13, 2011, because of a glut in Federal Reserve Banks and associated storage facilities. That suspension also included Native American dollars for circulation.

Kennedy half dollars, Presidential and Native American dollars are still being struck in circulation quality, but only for numismatic products at prices well above face value. Their costs are addressed under the Mint’s numismatic programs.

Mint officials have studied alternative compositions for U.S. coins on multiple occasions during the 20th and 21st centuries.

Rising copper costs in the 1970s led to the testing of many compositions for the cent, many supposedly struck with nonsense dies. Regular Lincoln cent dies were use for two compositions: aluminum for 1974 and 1975 Lincoln cents, and bronze-clad steel for 1974 cents. The price of copper fell before any of those compositional changes were adopted. Examples of 1974 cents in both compositions are in private hands, though it is illegal to own them.

In the early 1980s, the cent composition was changed as noted, to copper-plated zinc.

The Philadelphia Mint is expected to continue experimental strike production in February. ¦