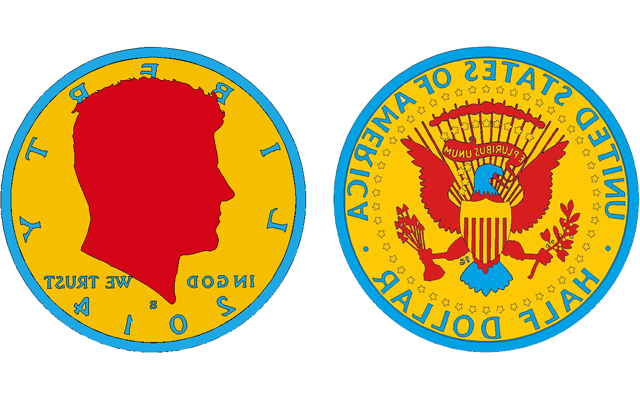 Illustrations identify the areas of the dies for the Enhanced Uncirculated silver 2014-S Kennedy 50th Anniversary half dollar that will receive special treatment. The fields on both sides, indicated by the gold areas, will be wire brushed. The remaining areas will receive different intensities of laser frosting — heavy frost on the blue, and a standard frost on the red.

The United States Mint is taking precautions to prevent creating mule error coins along with the production of the 2014 Kennedy, 50th Anniversary half dollars.

A mule error is a coin or medal struck with obverse and reverse dies not intended to be used together.

The U.S. Mint is marking the 50th anniversary of the introduction of the Kennedy half dollar in 1964 with seven specially produced half dollars:

??A two-coin set containing copper-nickel clad Uncirculated half dollars from the Philadelphia Mint (P Mint mark) and Denver Mint (D Mint mark). The two coins are available only in the set.

For 2014, the Mint will use two versions of the Kennedy obverse, which might seem to create the possibility of producing mule errors. The Mint is using a standard version (same as 2013) for circulating and annual sets (Uncirculated Mint set, Proof, and Silver Proof), and a 1964 version for the seven 50th Anniversary coins.

All of the coins are dated 2014, except the gold Proof half dollar, which will be dual-dated 1964-2014. The obverse of the anniversary coins will bear the sculpt of Kennedy used in 1964 that was based on Chief U.S. Mint Engraver Gilroy Roberts' original 1963 model.

The West Point Mint will not be producing Kennedy half dollars other than the dual-dated gold Proof, so “there is no possibility of mixing Kennedy designs” at West Point, according to U.S. Mint officials.

Since the Denver Mint will not be making any Kennedy half dollars other than the Uncirculated silver versions, there’s no opportunity to mix the Kennedy designs there, according to U.S. Mint officials. The Denver Mint has already struck copper-nickel clad versions of the regular, circulation-quality 2014-D half dollar.

The Philadelphia Mint does not normally make silver Kennedy half dollars, so “there is no possibility of mixing Kennedy designs,” according to U.S. Mint officials.

“To keep the possibility of mule errors to a minimum, ‘standard’ Kennedys and ‘special’ Kennedys will not be run at the same time in Philadelphia (clad), San Francisco (silver), or Denver (clad),” U.S. Mint spokesman Michael White indicated by email June 12.

For the Enhanced Uncirculated 2014-S Kennedy, 50th Anniversary silver half dollar, the fields on both obverse and reverse dies will be wire brushed.

Different elements on the artwork lettering on each side will be laser frosted with different intensities.

Treatment of the obverse and reverse fields will be executed through use of a wire wheel.

On the obverse, Kennedy’s portrait will receive heavy frosting. Standard frosting will be used on the rim, LIBERTY, 2014, IN GOD WE TRUST and the S Mint mark.

On the reverse, heavy frost will be used on the rim, UNITED STATES OF AMERICA and HALF DOLLAR; on the two design dots separating the two lettering sequences; and the eagle’s head and its tailfeathers.

Standard frost will be applied to the clouds and rays; the ribbon inscribed E PLURIBUS UNUM; the eagle’s wings and the lower part of its neck, and its legs and talons; the arrows and the olive branch; and the stripes of the shield.

For the Reverse Proof 2014-W Kennedy, 50th Anniversary silver half dollar dies, both the obverse and reverse fields will be laser frosted. The artwork, lettering and Mint mark on the Reverse Proof half dollar will be polished to a bright finish, according to U.S. Mint officials. This combination of finishes is the reverse of a regular Proof coin, on which the fields are highly polished and the raised devices are frosted.

Visit the U.S. Mint's website for updates on release dates and availability.