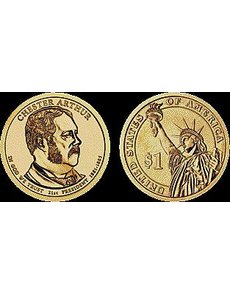 Since going on sale April 5 in multiple numismatic product options from the U.S. Mint, the Mint’s combined inventory of 5.74 million circulation-quality 2012-P and 2012-D Chester A. Arthur Presidential dollars has been nearly 50 percent depleted.

Mint officials cite cost savings as among the reasons for not conducting the ceremonies.

From 2007 to 2011, when the coins were struck for release into circulation, Mint officials conducted a launch event for each Presidential dollar, from the 2007 coin for George Washington to the 2011 coin for James Garfield.

Treasury Secretary Timothy F. Geithner suspended Presidential dollar coin production for circulation on Dec. 13, 2011, as a cost-cutting measure. His decision was in reaction to excessive inventories of the coins. Federal Reserve coffers are choked with more than 1.4 billion coins, which officials say are sufficient to meet more than a decade of commerce demand without striking additional coins.

In a statement released Jan. 19 by Tom Jurkowsky, director of the U.S. Mint’s Office of Public Affairs, said: “Coin launch events are very important to the United States Mint. They represent an exceptional form of outreach to a wide base of individuals — from collectors and children to historians and citizens who may have an interest in the place or person being honored. Launch events help us ‘connect America through coins’ as coins tell the story about our nation’s history, culture and traditions. Quite simply, coins form part of our nation’s financial fabric and launches represent an opportunity to tell our story.

“However, we must ensure when we do coin launch events that we do them in the most cost effective manner possible. Just as much as we have an obligation to tell our story, we are just as obligated to tell that story efficiently.

“Therefore, we are looking at our coin launch procedures and processes to ensure that we do them in the most efficient manner possible.”

Although the Mint will not strike Presidential dollars for circulation, it will continue to produce circulation-quality coins for collectors.

In a telephone interview in January with Coin World, U.S. Mint Deputy Director Richard A. Peterson stated the U.S. Mint would be producing circulation-quality Presidential dollars in various quantity options at premiums above face value, since the options would represent numismatic products.

The Mint is also planning to offer the 2012 Native American dollar in numismatic product options, since its production is tied to the production of the 2012 Presidential dollars.

While U.S. Mint officials have not yet formally disclosed the various numismatic product options and pricing for Presidential and Native American dollars, officials have confirmed the Direct Ship Program has been canceled. The Direct Ship Program allowed customers to order $250 face value boxes of circulation-quality Presidential dollars and Native American dollars in 25-coin rolls initially at face value, but pricing subsequently changed to include face value and a shipping charge.

A similar ordering option is being contemplated for the as-yet-to-be-announced numismatic products, but pricing has not been disclosed.

The original release date for the 2012 Chester A. Arthur Presidential dollar was Feb. 16.

The remaining original release dates for Presidential dollars were:

The El Yunque ceremony is scheduled to be conducted March 14 at the El Portal Visitors Center in the park (see story, page 5, this issue); the coin was released into circulation Jan. 23. The Chaco Culture ceremony, according to park officials, is scheduled for April 26, with a Federal Reserve circulation release date of April 2.

U.S. Mint officials did not release complete details on the ceremony as of March 10.

Federal Reserve circulation releases for the third through fifth 2012 America the Beautiful quarter dollars are:

The Federal Reserve circulation releases will not necessarily coincide with the official U.S. Mint launch ceremonies. ¦