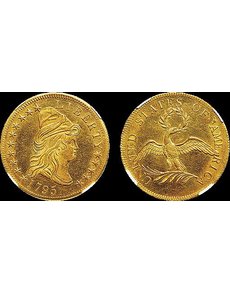 The eagle is graded Mint State 64 by Numismatic Guaranty Corp. and carried an estimate of $200,000 and up.

Of the 2,296 lots of U.S. coins, tokens, medals and paper money offered, 86 percent reportedly sold, bringing total prices realized for the sessions to $4,888,273. The prices realized include the 15 percent buyer’s fee added to the final closing hammer price.

The variety in the auction is identified as Bass-Dannreuther 4 in Early U.S. Gold Coin Varieties: A Study of Die States, 1795-1834 by John W. Dannreuther and Harry W. Bass Jr., and as Taraszka 4 in United States Ten Dollar Gold Eagles 1795-1804 by Anthony J. Taraszka.

The Bass-Dannreuther book estimates that, from an estimated mintage of 854 to 1,500 BD-4 1795 eagles, 60 to 80 are believed to survive today. The total mintage for all 1795 Capped Bust eagles of all varieties was 5,583 pieces. The variety pairs Obverse 3 with Reverse C; the obverse is unique to this pairing, while the reverse is used with a different obverse to create another variety.

According to the book, the BD-4 variety is the only one among five varieties of 1795 Capped Bust, Small Eagle, 13 Leaves eagles where the numeral 5 in the date does not touch the bust of Liberty. The Bass-Dannreuther book states the characteristic of the distant 5 is the only key diagnostic needed to identify the 1795 BD-4 variety.

According to Dannreuther: “The eagle was the second gold denomination struck by the United States Mint. Calling it a denomination is actually a misnomer. Even though a gold eagle was denominated as a ten-dollar coin, our forefathers traded gold by the tale.”

Tale, in this instance, means count or tally, a number of things taken together (i.e., the weight and purity of an individual coin).

None of the Capped Bust eagles, struck from 1795 to 1804, bear any denominational inscriptions.

“Striking gold eagles that were only going to be exported or melted was wasteful of the Mint’s production capacity,” according to the Goldberg auction lot description.

“Production of this denomination ceased in 1804, possibly under the orders of President Jefferson. The halt in production for the gold eagle proved more than momentary. It wouldn’t be struck for circulation again until 1838, at the second Philadelphia Mint.”

Among the other top lots was a nearly perfect 1899 Coronet $5 half eagle graded Proof 69 Ultra Cameo by NGC. It was one of just 99 struck and the lot description proposed that it was a candidate for the finest known of the type, suggesting that it was “deserving of a place in the Smithsonian or some European Palace Collection!” Against an estimate of $100,000 and up it sold for $172,500.

High-grade Indian Head 5-cent coins were offered as part of “The Gerald Forsythe Duplicate Buffalo Nickel Collection” including a Professional Coin Grading Service MS-66 1937-D Indian Head, Three-Legged Bison 5-cent that sold for $51,748. Although this issue is available in circulated and even lower Mint State grades, it becomes rare at high Mint State levels and the catalog commented that it is “next to unobtainable” when certified MS-66.

A rare Proof Seated Liberty half?

That description stated, “The real story behind this coin is lost in the mists of history now, but the physical attributes of the piece stand as testament that something special was done to create a specimen striking in New Orleans in 1854. This is the only coin even rumored to exist as a specimen or proof striking of the 1854-O half dollar.”

The Goldbergs agreed, calling the piece “a landmark rarity for the Year 2013!”

When offered at a 1973 Stack’s auction, it was described as “a magnificent Brilliant Proof, with full glittering surface even in the stripes of the shield on the reverse. There is no doubt that this is a specimen striking, not only because of its mirror surface, but also because of the perfection of strike.”