Mint should return to drawing boards for 2013 Ohio 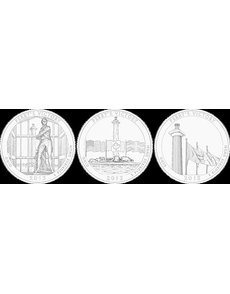 The Commission of Fine Art rejected the U.S. Mint’s three design candidates for the 2013 quarter dollar to honor Perry’s Victory and International Peace Memorial. One design depicts a statue of Commodore Oliver Hazard Perry and two offer different views of the 352-foot Doric column at the memorial site on South Bass Island in Lake Erie. 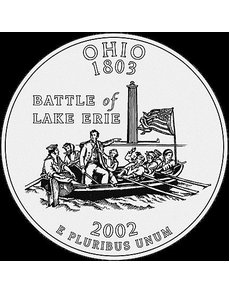 2002 Ohio State quarter dollar finalist design depicts the moment when Perry made his way from his severely damaged flagship, the Lawrence, in a rowboat through enemy fire to the Niagara, the focal point of W.H. Powell’s painting.

It’s apparent that designs for most of the America the Beautiful quarter dollars issued to date are engraved copies of photographs of popular attractions from the various nature sites being honored on the coins.

While that may work OK for national parks, it presents a real disconnect for sites that have important ties to our nation’s history.

The three designs advanced by the United States Mint for Ohio’s 2013 quarter dollar, which is supposed to honor Perry’s Victory and International Peace Memorial, are a good example of the disconnect.

“Perry’s Victory” refers to Commodore Oliver Hazard Perry and the United States naval victory on Sept. 10, 1813, when he led nine small ships to defeat a British squadron of six large vessels in the Battle of Lake Erie. The victory proved to be a turning point in the War of 1812 and secured the Northwest Territory for the United States as well as opening up critical supply lines.

The International Peace Memorial refers to a 352-foot Doric column erected on South Bass Island at Put-in-Bay on Lake Erie that was supervised by a multi-state commission from 1912 to 1915. The monument’s intent was “to inculcate the lessons of international peace by arbitration and disarmament.” (The remains of three American and British officers are interred under the stone floor of the monument.) From the observation deck of the column one can look out onto Lake Erie and imagine the 1813 battle scene or merely view islands in Lake Erie and the shorelines of Ohio, Michigan and Ontario, Canada.

It’s obvious the National Park Service liaison person designated to assist the U.S. Mint with design concepts provided photographs of the memorial column and one from inside the visitor’s center, because that’s exactly what the Mint’s artist rendered for the design concepts: A statue of Perry inside the visitor’s center with the memorial column in view through a window (complete with lattice), a wide-angle view of the column on South Bass Island, and a close-up of the column’s observation deck, with U.S., British and Canadian flags prominent on both column designs.

We agree with the Commission of Fine Arts. The three designs advanced by the Mint just don’t work. They are too busy for the small canvas of a quarter dollar and they do not connect to the only legend, “Perry’s Victory,” at the top of the design, the subject being honored.

The people of Ohio are very aware of Perry’s historic role. When some 40,000 residents of the Buckeye State offered ideas for their 2002 State quarter dollar design, “Perry’s Victory on Lake Erie” was among the six finalists. In fact, a coin design based on the famous painting by Ohio native William Henry Powell was developed for the online voting, and the rights are owned by the state of Ohio. (No doubt, Ohio’s governor would make the design available to the Mint for free for use on a new quarter dollar.)

If Mint artists insist on creating their own rendition, one of Powell’s oil paintings of the famous naval battle hangs in the Senate wing of the U.S. Capitol. The other has a place of honor in the rotunda of the Ohio Statehouse in Columbus. So there’s easy access to see the paintings in the flesh. Plus images of both paintings are available on the Internet.

The U.S. Mint should go back to the drawing boards. Perry’s victory was an important event in U.S. history and it is a worthy subject to commemorate on this coin. There’s plenty of time. It just takes a “can do” attitude and a willingness to create good coin designs. ¦