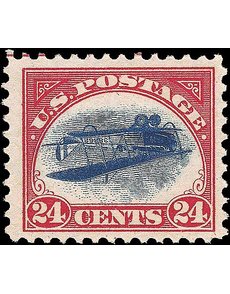 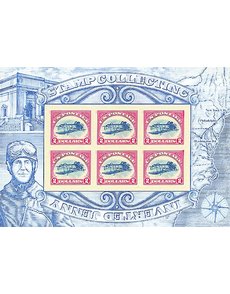 A Mint example of the new 2013 United States $2 Inverted Jenny stamp issued as a souvenir sheet of six. The stamp replicates the design of the 1918 error with the plane flying up-side down. 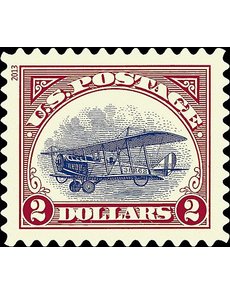 A U.S. Postal Service mock-up of the intentionally produced $2 “Inverted Inverted Jenny” stamp variety with the plane flying right side up. The Postal Service created 100 souvenir sheets, consisting of six stamps each, and seeded them into blind packaging.

The United States Postal Service is taking a page from the U.S. Mint’s handbook and revisiting a classic design for a new stamp. On Sept. 22 it reissued the classic “Inverted Jenny” stamp error with a new $2 stamp. The stamp depicts a Curtiss JN-4H — an early biplane used in Air Mail service that was nicknamed the “Jenny” — upside down

But unlike when the U.S. Mint revisited James Fraser’s classic Indian Head 5-cent design on the 2001 American Buffalo commemorative dollar, the USPS is celebrating both one of its greatest mistakes and also creating an instant stamp rarity, intentionally.

To celebrate the opening of the William H. Gross stamp gallery at the Smithsonian’s National Postal Museum in Washington, D.C., and to promote October as National Stamp Collecting Month, the USPS did something decidedly “out of the box.” It intentionally produced 100 souvenir sheets of six stamps where the plane flies right side up. The resulting stamp is an invert of the invert.

To get the public excited about stamp collecting and to bring a new generation into the hobby, the USPS is creating, in effect, an error of the error stamp. But does the intentional production of a rarity that will ultimately be inaccessible to most collectors really help the hobby?

The Inverted Jenny is a 1918 24-cent airmail stamp and is one of the few rare stamps that transcends philately and is well-known by people generally. It’s been included in a 1993 episode of The Simpsons where Homer Simpson disposes of a full sheet of Inverted Jennys in the 5-cent box at a local swap meet. He tosses the sheet because the airplane is flying upside down.

In terms of rarity and desirability, the Inverted Jenny is stamps’ equivalent to U.S. coins’ 1913 Liberty Head 5-cent piece or the 1804 Draped Bust dollar.

A single sheet of 100 of the classic inverted stamps was produced in 1918 as the USPS rushed to create a stamp celebrating the first airmail flight, and the stamp was intended for mail carried for air service between Washington, D.C., and New York City. The design required two colors, and sheets were placed in the printing press twice: first to apply red ink and second to apply blue ink. The error sheet was inverted when it went through the second printing; the plane, printed in the blue ink, was thus printed upside down.

Examples of the original error today sell for at least six-figure prices when offered. The record for a single “Inverted Jenny” is $977,500, which was paid in 2007 for a nicely centered, lightly hinged example at a Robert A. Siegel auction.

Stamp collectors got a hint that the USPS had something up its sleeve when the USPS announced that 13,200,600 stamps were produced. The 600 additional stamps accounted for the “Inverted Inverted Jenny” stamps.

Stamp collectors have generally been displeased with this, since the odds of finding one of the sheets is about 22,000 to 1.

There’s no secret to finding one. Each souvenir sheet is blind-packaged inside a white envelope with cardboard and shrink-wrapped so the contents cannot be seen. The USPS even includes a congratulatory note inside the wrapping asking a lucky recipient of one of the 100 special sheets to call a phone number to receive a certificate of acknowledgement signed by the postmaster general.

The Mint is unlikely to release an intentional error or variant to get attention, as it views errors as a deviation in strict quality control; errors are to be removed and destroyed, not celebrated.

If the Mint produced a special, limited edition Presidential dollar in a variant form, it would likely be collected in the series and included in standard reference publications. Yet, the Scott catalog (also by Coin World publisher Amos Press) has stated that the new “Inverted Inverted Jenny” variety will not receive a major or minor Scott catalog number, although it will be described in a footnote accompanying the $2 stamp’s listing. The reason: It violates Clause 6 of the Scott catalog listing policy that deals with intentional varieties created in small quantities.

Postmaster General Patrick R. Donahoe said in a recent interview with The New York Times, “The last time we had a stamp issue everybody got excited about was the Elvis stamp, 20 years ago,” and that this was a way to let the public “have some fun” with stamps.

In a Nov. 11 editorial in Linn’s Stamp News, Charles Snee, editor of the Scott catalogs, wrote, “In effect, the Postal Service has created a $12 lottery ticket similar to the golden tickets that were hidden in Willie Wonka’s chocolate bars,” adding, “There are no real winners in this contest.” Snee characterized the USPS move as opportunistic gimmickry.

It’s interesting to consider how coin collectors would respond to something similar. What would coin collectors think of the U.S. Mint producing an intentional error and selling that error directly to the public? Or, what if the Mint started to intentionally create varieties to add spice and interest to underperforming commemorative coin programs? How about a dramatic doubled die on a circulating America the Beautiful quarter dollar to get people looking closely at their coins? What if one in every 1,000 Proof sets sold had a special variety inserted?

To even indulge in such thoughts is a slippery slope and one hopes that the Mint does not follow in the steps of the USPS.

Instead, the Mint would benefit from continuing to focus on creating quality products that are accessible to collectors and not focus on producing intentional rarities that will eventually be out of reach of all but those who are either very lucky, or very wealthy. ¦