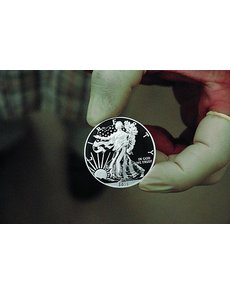 The obverse of an Enhanced Uncirculated American Eagle silver dollar from the 2013 West Point Two-Coin Silver set as photographed during a June 2013 visit to the West Point Mint by Coin World.

More than 235,000 of the 2013 American Eagle West Point Two-Coin Silver sets were sold during the nearly month-long sales period in the summer of 2013.

The United States Mint’s Dec. 23 revised though still unaudited sales report for the sets indicate 235,332 of the two-coin sets were sold. That figure is a 45,621-set drop from the June 6 closing sales figure of 281,301 sets.

The difference in the (also unaudited) closing sales total for June 6 and the figure released Oct. 25 was the result of customer returns and order cancellations. The cancellations were the combined result of customers canceling orders before shipment from the Mint and the Mint canceling orders because customer credit cards registered for payment had expired.

Audited, final sales figures are almost always lower than the “final” sales number released immediately after a program’s close, because of returns and canceled orders.

The Enhanced Uncirculated 2013-W American Eagle silver dollar has multiple finishes on different elements of its design, resulting in a distinctive look for a coin struck by the U.S. Mint.

The fields on the Enhanced Uncirculated coin’s obverse and reverse have a light frosted finish.

Each side of the American Eagle coin also has two other finishes.