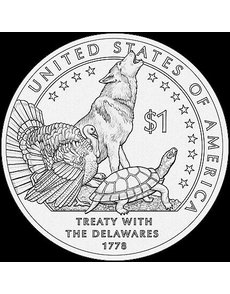 The adopted design for the reverse of the 2013 Native American dollar depicts a turkey, howling wolf and turtle, all symbols of the clans of the Delaware Tribe. 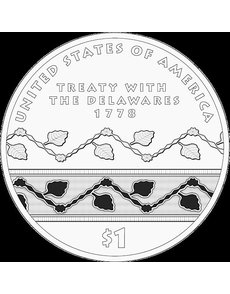 The Commission of Fine Arts recommended this design, based on a Native American fabric, for the reverse of the 2012 Native American dollar during the panel’s September meeting, but it was not adopted.

The adopted design features a turkey, howling wolf and turtle — all symbols of the clans of the Delaware Tribe — and a ring of 13 stars to represent the original Colonies. It was sketched by U.S. Mint Artistic Infusion Program Master Designer Susan Gamble and sculptured by U.S. Mint Medallic Sculptor Phebe Hemphill.

The design was approved Oct. 16 by Deputy Treasury Secretary Neal S. Wolin on behalf of Treasury Secretary Timothy F. Geithner. It was selected from 13 reviewed by the Citizens Coinage Advisory Committee and Commission of Fine Arts.

Gamble’s reverse design was recommended by the CCAC for approval during its Sept. 21 meeting, the day after the CFA recommended a design based on a Native American fabric.

The proposed designs were rendered by members of the United States Mint’s engraving staff and artists with the Artistic Infusion Program.

The 13 designs reviewed were all thematic of the Sept. 17, 1778, treaty signed at Fort Pitt, now Pittsburgh, between the United States of America and the Lenape, also known as the Delawares.

The CCAC’s recommended design polled 11 points in the panel’s Sept. 21 voting, while CCAC members awarded third place to the design selected by the CFA.

During their discussions, CCAC members raised the issue of whether it was appropriate to commemorate events that generally favored European settlers over the Native American tribes.

Delaware Indians became dissatisfied with the treaty within a year of its signing.

The 1778 agreement allowed American troops passage through the lands inhabited by the Delawares to attack British troops stationed at a Detroit fort.

Gamble’s reverse will be paired with sculptor Glenna Goodacre’s Sacagawea design that appeared on the obverse of the Sacagawea dollar from 2000 to 2008, and was carried over to the Native American dollar series, which started in 2009.

Native American dollars are being struck in circulation quality, but restricted for numismatic sales in bags and rolls. ¦