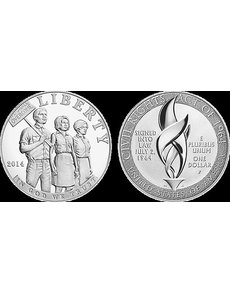 The 2014 Civil Rights Act of 1964 silver dollar is set to be released sometime in January by the United States Mint.

Final designs approved for the 2014 Civil Rights Act of 1964 silver dollar were released Dec. 19 by the U.S. Mint.

Proof and Uncirculated versions of the silver dollar, to be struck at the Philadelphia Mint, are to go on sale starting Jan. 2.

Authorized by Public Law 110-451, the silver dollar commemorates the 50th anniversary of the enactment of the Civil Rights Act of 1964.

The obverse design depicts three Civil Rights marchers — two women and one man — clasping hands in unity. The man is carrying over his right shoulder a sign inscribed WE SHALL OVERCOME.

The silver dollar’s reverse was designed by Donna Weaver, a former U.S. Mint sculptor-engraver who is now an AIP master designer. The design is sculptured by U.S. Mint Medallic Sculptor Jim Licaretz. Weaver’s design features three flames intertwined to symbolize freedom of education, freedom to vote and the freedom to control one’s own destiny.

The mintage in Proof and Uncirculated versions combined is limited to 350,000 silver dollars.

Each silver dollar includes a $10 surcharge in the purchase price. The surcharges, once the U.S. Mint recoups all of its production costs, are authorized to be paid to the United Negro College Fund to carry out the fund’s purposes. ¦