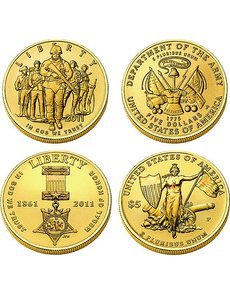 The U.S. Mint resumed sales of 2011 commemorative gold coins Aug. 25, two weeks after halting sales of the coins for repricing in response to rising gold prices.

The U.S. Mint also returned to sale Aug. 24 other gold numismatic products that were pulled from sale Aug. 22 for repricing for the second time in three weeks.

The U.S. Army commemoratives were offered beginning Jan. 31 at the introductory price of $449.95 for the Proof coin and $439.95 for the Uncirculated version through March 2, when regular issue prices went into effect.

When the U.S. Army coins went on sale, the spot price of gold per troy ounce was $1,324, but the commemorative coin prices would have been established in the days before the program was officially launched. By the time the Medal of Honor coins were offered, the London PM fix was $1,402.50.

U.S. Mint officials have not indicated whether there will be any price drop in the gold commemorative coin prices following the dip in the spot price of gold.

Static pricing for gold commemorative coins may have ended. Mint officials have placed the U.S. gold commemoratives on a pricing grid similar to but separate from that which has been used since January 2009 for pricing the U.S. Mint’s other gold numismatic products — Proof American Eagle 1-ounce and fractional gold coins and Uncirculated American Eagle 1-ounce coins; Proof American Buffalo 1-ounce gold $50 coins; and Proof and Uncirculated First Spouse half-ounce gold $10 coins.

The American Eagle, American Buffalo and First Spouse coins were pulled from sale by the U.S. Mint on Aug. 9 for repricing and reoffered at higher prices beginning Aug. 10. The gold numismatic products were regularly repriced on Aug. 17, then pulled from sale again on Aug. 22, before being repriced and placed back on sale at 11:30 a.m. Eastern Time Aug. 24.

“The gold pricing for the week has been completed and the range (and prices) remains the same as when products were taken down — $1,750 to $1,799.99,” according to information provided by U.S. Mint spokesman Michael White.

The other repriced products and current levels are:

The changing cost of the gold used to mint gold commemorative coins is the sole reason for the Mint changing the prices of the coins, according to Tom Jurkowsky, director of the Mint’s Office of Public Affairs.

“The volatility in the gold market has forced us to change the way we price gold commemorative coins so we can ensure that we fully recover the cost of the gold coins and, at the same time, ensure that we do not recover more than is reasonably necessary to sustain the program,” Jurkowsky said.

The U.S. Mint purchases gold for its programs on a recurring basis depending on the demand for all numismatic products that use gold, Jurkowsky said. ¦