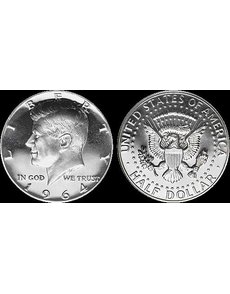 U.S. Mint officials proposed a special set in 2014 to mark the 50th anniversary of the Kennedy half dollar. Possibilities mentioned include a .900 silver Reverse Proof coin. Shown is a regular silver Proof 1964 Kennedy half dollar struck at the Philadelphia Mint.

Coins in one of two commemorative coin programs for 2014 are scheduled to be released for sale sometime in January. Coin designs were unavailable.

The 2014 Civil Rights Act of 1964 silver dollar is listed for a January release, although no specific release date is offered, on the 2014 upcoming products preliminary list posted by the U.S. Mint on its website.

The list indicates the Proof dollar will be offered for $49.95 each and the Uncirculated version at $44.95 each. Both prices are lower per option than prices charged by the Mint for its 2013 commemorative silver dollars.

The Civil Rights Act of 1964 Commemorative Coin Act calls for the production and release of up to 350,000 silver dollars combined in Proof and Uncirculated condition.

The final adopted designs were scheduled to be released publicly during the week beginning Dec. 16, according to U.S. Mint spokesman Michael White.

Currently missing from the product listings is a set proposed in May 2013 by Mint officials to mark in 2014 the 50th anniversary of the release of the Kennedy half dollar.

2014 will also witness the release of the commemoratives in the three-coin National Baseball Hall of Fame coin program, though the schedule lists no sale date yet.

The complement of upcoming 2014 numismatic products from the Mint currently posted online identifies the products by month of their scheduled release and includes pricing, but no specific release dates. Most of the 2014 products listed are for annual offerings, such as Proof sets; bags, rolls and boxes of America the Beautiful quarter dollars and Presidential dollars; and Proof gold, silver and platinum American Eagle coins and Proof American Buffalo gold bullion coins.

Since the gold and silver releases are tied to a pricing grid based on the fluctuating spot price of the precious metal they contain, pricing for those issues will be announced at the time of release.

Neither pricing nor scheduled release dates are offered for the Uncirculated 2014-P America the Beautiful 5-ounce silver bullion coins.

Also not yet scheduled are the 2014 First Spouse gold $10 coins.

Find a link to the list of currently posted United States Mint products for 2014 online at http://catalog.usmint.gov. ¦