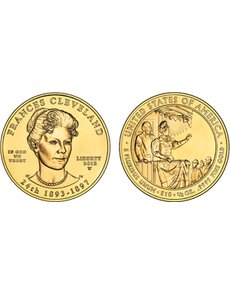 The final 2012 First Spouse gold coin is now available from the U.S. Mint. The coin is the second for Frances Cleveland, and marks the second term of her husband, Grover Cleveland.

The fourth and final 2012-W First Spouse half-ounce gold $10 coin was issued Dec. 20 with the release of the Frances Cleveland, Second Term coin.

The 2012-W Frances Cleveland, First Spouse, Second Term $10 gold coin is limited to a maximum mintage of 13,000 coins combined between the Proof and Uncirculated coin options, with the split determined by order placement.

While the coins can continue to be sold into calendar year 2013 as long as inventory remains, Dec. 31, 2012, is the final day the West Point Mint can legally strike the coins.

Pricing will be based on the U.S. Mint’s pricing structure for gold coins, at www.usmint.gov/catalog.

The obverse portrait of Frances Cleveland was designed by Barbara Fox, a master designer with the U.S. Mint Artistic Infusion Program, and sculptured by U.S. Mint Medallic Sculptor Phebe Hemphill.

The reverse design, showing the first lady with her husband, Grover Cleveland, at the back of a train as they greet the public, was designed and sculptured by U.S. Mint Medallic Sculptor Joseph F. Menna.

The 2012 First Spouse Four-Medal set, offered at $16.95 per set, contains one each of the four bronze medals bearing the likenesses of the designs that appear on the First Spouse Gold Coins honoring Alice Paul and the Suffrage Movement, Frances Cleveland (first and second terms), and Caroline Harrison.

Hearing- and speech-impaired customers with TTY equipment may order the products by calling 888-321-6468.

Customers should add $4.95 to all domestic orders for shipping and handling costs. ¦