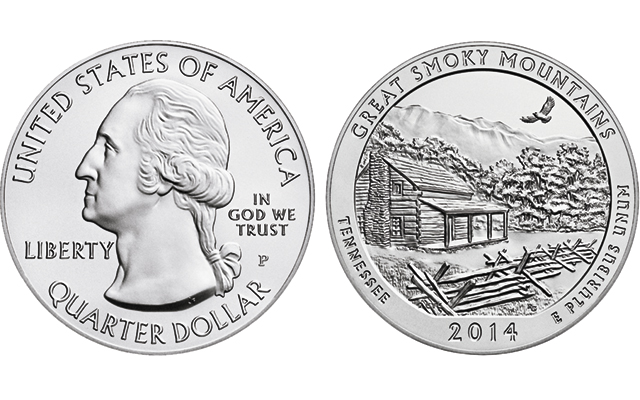 The U.S. Mint has recorded a sellout of its maximum authorization of 25,000 of the Uncirculated 2014-P Great Smoky Mountains National Park 5-ounce silver quarter dollars.

The maximum mintage limits combined for the bullion and Uncirculated versions of the 2014 5-ounce coins are 65,000 coins per design as set by the secretary of the Treasury, according to U.S. Mint officials. Mint officials state that the 65,000 coins per design ceiling is divided between the Uncirculated coins bearing the Philadelphia Mint’s P Mint mark and the bullion versions which carry no Mint mark.

Despite the 65,000 coins per design limit, the Mint set production limits for the Uncirculated versions, leaving the remainder of the maximum total for bullion sales:

The Uncirculated version of the Great Smoky Mountains coins went on sale April 7; the Shenandoah coin, on May 15; and the Arches coin, on June 11. All were offered at $154.95 per coin directly to the public.

The Uncirculated Great Sand Dunes coins are scheduled for sale beginning Sept. 15, with the Uncirculated Everglades coins planned for sometime in November.

The bullion versions of the 5-ounce silver quarter dollars are not sold directly to the public, but are distributed through the same network of authorized purchasers who buy the American Eagle gold, silver and platinum bullion coins for the spot price of the metal on a given day, plus a set premium.

The premium the authorized purchasers pay is the spot price plus $9.75 per coin. The coins are then resold to other dealers and the public.

Bullion 5-ounce silver quarter dollar sales through Aug. 25 reached 29,500 for the Great Smoky Mountains coins; 20,000 each for the Shenandoah and Arches coins; and 3,400 of the Great Sand Dunes coins.

The Great Sand Dunes coin began being purchased by the authorized purchasers on Aug. 25.

To date, the maximum mintage for any of the 5-ounce silver Uncirculated coins is 26,637 for the 2010-P Mount Hood National Forest coin.

The highest bullion mintage is 126,700 each for both the 2011-P Gettysburg National Military Park and Glacier National Park coins.

The lowest mintage so far for the bullion versions is 20,000 each for the 2012 Hawai’i Volcanoes National Park and 2012 Denali National Park coins.

The lowest mintage for the Uncirculated 5-ounce coins for which sales have been completed is 14,807 for the 2011-P Chickasaw National Recreation Area quarter dollars.

Both the Uncirculated collector and bullion versions of the 5-ounce silver quarter dollars are struck at the Philadelphia Mint on a special press dedicated to their production.