Mint reaches out on convex/concave coins 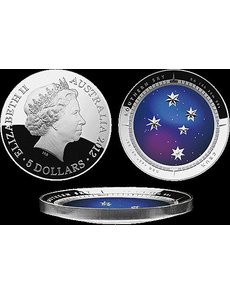 U.S. Mint officials have consulted with the Perth Mint, which worked with the Royal Australian Mint, issuer of this Australian coin with convex and concave sides.

The U.S. Mint has been reaching out to at least one foreign mint with expertise in the production of a convex/concave coin as it prepares its own similar issues for the 2014 National Baseball Hall of Fame coin program.

Tom Jurkowsky, director of the U.S. Mint’s Office of Public Affairs, said March 21 that U.S. Mint technical personnel had an extensive group discussion with a senior member of the Perth Mint’s technical staff in Australia at the start of the program to establish project parameters. The meeting was held as part of the research and development for the three-coin commemorative program, he said.

Jurkowsky said that the Perth Mint representative acted as an intermediary with the Royal Australian Mint, which produced a convex/concave 2012 silver $5 coin commemorating the Crux constellation, otherwise known as the Southern Cross.

The enabling legislation for the National Baseball Hall of Fame coins — Public Law 112-152 — calls for the gold $5 half eagle and silver dollar to be struck with dies resulting in the common obverse being concave and the common reverse being convex.

The copper-nickel clad half dollar in the program will be struck with normal dies that will not exhibit the convex/concave contour, as per the law.

Public Law 112-152 requires that the half eagle and silver dollar “should be produced in a fashion similar to the 2009 International Year of Astronomy coins issued by Monnaie de Paris, the French Mint, so that the reverse of the coin is convex to more closely resemble a baseball and the obverse concave, providing a more dramatic display of the obverse design chosen pursuant to section 4(c).”

Section 4(c) requires a design competition for which a common obverse design will be selected by the Treasury secretary for all three coins.

The 2009 French ?200 gold and ?10 silver International Year of Astronomy coins are concave on the obverse and convex on the reverse.

For the 2012 Australian silver $5 coin, the obverse bearing Queen Elizabeth II’s effigy is convex while the reverse is concave.

U.S. Mint officials have not disclosed whether they have yet consulted Monnaies de Paris officials as part of the research and development process or if they plan to do so.

Research and development on the baseball coins is unprecedented in recent Mint history, according to Jurkowsky.

Extensive development was undertaken on the concave/convex coins, Jurkowsky said, to prove out the following:

“Due to the project’s high visibility, anticipated volumes, coupled with the extreme technical challenges, we elected to do complete test coin development in all three alloys — gold, silver, and clad,” Jurkowsky said.

Coin World has asked for images depicting the concave/convex elements of the dies as well as the resultant text strikes.

“Nonsense” artwork is used exclusively for test strikes. The nonsense designs often feature elements that are similar in position and size to the actual designs used on coinage.

The U.S. Mint has had some experience with convex/concave issues related to numismatic products.

The congressional gold medal authorized for Major League Baseball’s Roberto Clemente in 1973 and the bronze duplicates sold by the Mint to the general public are convex on both obverse and reverse. ¦