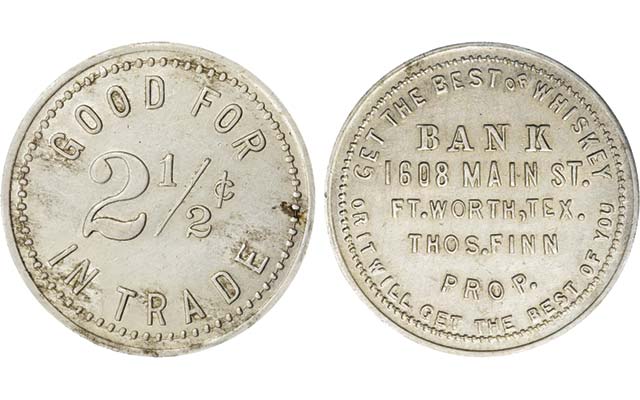 This 2½-cent token was issued by the Bank saloon of Fort Worth, Texas. The token warns, “Get the best of whiskey or it will get the best of you.”

What the country needs is a good 2½-cent piece, Mint Director Robert Wickliffe Wooley essentially declared in the 1916 Annual Report of the Director of the Mint.

In the report released to the public Nov. 30, 1916, he wrote, “I beg to suggest the advisability of recommending to Congress the passage of an act authorizing the coinage of a copper and nickel 2 ½-cent piece. Inquiry, prompted by requests contained in letters from many parts of the country, discloses a real demand for it. When you consider that we have no coin between the 1-cent piece and the 5-cent piece and that many an article worth more than a cent and less than 5 cents sells for the latter price because of the lack of an intermediate monetary unit of value, the economic importance of it will be readily seen.

“Articles which now sell for 15 cents each or two for a quarter would sell for 12 ½ cents. Popular shops, such as the 5 and 10 cent stores, would undoubtedly place articles now selling two for 5 cents on sale at 2 ½ cents each; and it is not at all unlikely that street car companies would carry children of school age for 2 ½ cents.”

A few days later, the Pittsburgh Post-Gazette discussed the possibility of such a coin in a Dec. 10, 1916, front-page article about proposals to coin 2-cent and 3-cent pieces, as well.

The newspaper reported: “The need for new denominations is also indicated by the fact that in certain sections of the country merchants will give the customer a brass or pasteboard check in change which is good for ½ or 2 ½ cents. In New Orleans such practice is common and even though the law does not provide, the people have made coins themselves, which are called ‘quarties.’ In the New England states these personal coins have also been observed in circulation and even in Pittsburgh, where it is asserted that certain dispensers of ‘wet goods’ have long handed out a 2 ½ cent check when 15 cents was passed over the bar for a two-for-a-quarter drink.”

Token collectors are familiar with the odd denomination. Taylor’s Hotel in Wissahickon, Pa., even issued a 2½-cent token that bears a passing resemblance to a Barber coin.

Researchers have cataloged an extensive run of  U.S. Mint pattern 1916 dimes, quarter dollars and half dollars, but no 2½-cent pieces. The new Mint director, Raymond T. Baker, made no mention of the proposed denomination in his 1917 annual report.