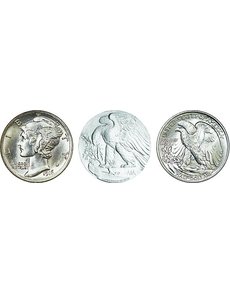 Should the U.S. Mint get the green light to produce American Eagles in palladium, enabling legislation mandates that the obverse design be a high-relief rendition of the obverse of the Winged Liberty Head dime, left, and that the reverse be a high-relief rendering of the reverse of the American Institute of Architects gold medal, center (black and white image), introduced in 1907. Both the coin and medal were designed by sculptor Adolph A. Weinman. Note the similarity between the AIA medal reverse and the reverse of the Walking Liberty half dollar, right, also a Weinman creation.

The U.S. Mint is seeking potential contractors for a possible competitive solicitation to perform a marketing study determining the demand regarding palladium bullion coin investments.

The market study is mandated in the American Eagle Palladium Bullion Coin Act of 2010, Public Law 111-303.

The coins will be issued only if the marketing study supports public demand, said Gordon Hume, the deputy director of the Mint’s Office of Public Affairs.

Mint spokesman Michael White said May 5 that the Mint posted a Request for Information April 13 at Fedbizzops at www.fbo.gov/, outlining the proposal. Potential interested parties can also contact the Mint’s Dean E. Bidle, chief of headquarters operations procurement, by telephone at (202) 354-6606 or by email at dean.bidle@usmint.treas.gov.

Hume said May 5 that the Mint has not yet begun producing models or dies, and will not unless the study supports the Mint’s producing the coins.

The authorizing act also permits the finish of the Proof and Uncirculated versions to be changed annually in subsequent years following the inaugural release.

Interested parties have until June 17 to respond to the RFI to be considered for the possible competitive solicitation to perform a marketing study.

The act authorizing the palladium coins, signed into law by President Obama on Dec. 14, mandates “that a Marketing Study be conducted, and submitted to the Secretary of the Treasury and the Congress, analyzing the market for palladium bullion investments and evaluating whether the demand for palladium bullion coins produced by the United States Mint would be adequate to ensure that the coins could be minted and issued at no net cost to taxpayers. The Act requires that this study be performed by a reputable and independent third party.”

According to the April 13 RFI, once the contract has been awarded, it is anticipated that it will take no longer than 90 days to complete the study.

According to the RFI proposal, “The scope of the resulting contract will include the full range of market analysis services to achieve the purposes of Public Law 111-303, section 2, paragraphs (v)(1) and (v)(8).”

Pursuant to the solicitation, “offerors” will be required to prepare and submit:

? A proposed performance work statement for a structured and comprehensive study to accomplish the purpose.

? Pricing arrangement with performance-based incentives that correspond to the performance standards.

Both the original coin and medal designs are the work of American sculptor Adolph A. Weinman.

The AIA medal reverse is similar to the reverse of the Walking Liberty half dollar (1916 to 1945), also a Weinman creation.

The half dollar reverse depicts a bold American eagle, wings unfurled and ready for flight, adjacent to a mountain pine growing out of a rock.

With few exceptions, the Weinman-designed AIA medal has been awarded annually since.

According to Richard Guy Wilson in his 1984 reference, The AIA Gold Medal, “a standing eagle with upraised wings plucks a laurel branch rooted to a rock,” on the AIA medal’s reverse. “On the rock, ‘.a.i.a.’ is inscribed and below, ‘.a.a.weinman. m.c.m.vii....’ ”

If the Treasury secretary opts to approve production of an Uncirculated version, according to Public Law 111-303, “the Secretary shall, to the greatest extent possible, ensure that the surface treatment of each year’s Proof and Uncirculated version differs in some material way to the previous year.”

While the Proof version would be struck only at the West Point Mint with the W Mint mark, an Uncirculated version of a palladium American Eagle could be produced at any of the remaining three Mint production facilities – Philadelphia, San Francisco and Denver.

Previous Uncirculated versions of the gold, silver and platinum American Eagle with Mint mark have been produced only at the West Point Mint.

Public Law 111-303 does not specify whether an Uncirculated version of the palladium American Eagle would carry the Mint mark of the facility where it is struck.

The metal to be procured for the contracted production of planchets for the palladium coins must be purchased from “palladium mined from natural deposits in the United States, or in a territory or possession of the United States, within 1 year after the month in which the ore from which it is derived was mined,” according to Public Law 111-303.

“If no such palladium is available or if it is not economically feasible to obtain such palladium, the Secretary may obtain palladium for palladium coins described in paragraph (12) of subsection (a) from other available sources.”

Paragraph 12, subsection (a) specifies “A $25 coin of an appropriate size and thickness as determined by the Secretary, that weighs 1 troy ounce and contains .9999 fine palladium.”

Currently, the United States has only one primary palladium producer, the Stillwater Mining Co. (www.stillwaterpalladium.com/), which operates two mines in southern Montana.

According to the Stillwater website, the firm’s two mines produce a high grade ore containing a palladium-to-platinum ratio of just over 3 to 1.

“After mining, the ore is refined by Stillwater at a site near Columbus, Mont., to a purity of 60 percent PGMs [platinum group metals], then shipped to Johnson Matthey for final refining of palladium, platinum and other metals at a facility in New Jersey,” according to the Stillwater website. ¦