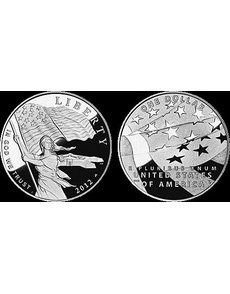 A limited-edition 2012 Star-Spangled Banner Bicentennial Silver Dollar set goes on sale from the U.S. Mint at noon Eastern Time June 1. The set is limited to an edition of 50,000 sets.

Restricted to a release of 50,000 units, the limited-edition set contains a Proof 2012-P Star-Spangled Banner silver dollar, a reproduction of one of Francis Scott Key’s original manuscripts of his poem “The Star-Spangled Banner,” the full lyrics to the “Star-Spangled Banner” and information about the U.S. national anthem against colorful artwork depicting the battle between U.S. and British forces for Fort McHenry in Maryland.

The 2012 Star-Spangled Banner Bicentennial Silver Dollar set is priced at $53.95. A household order limit of 100 units will be in place for a minimum of one week. The ordering limit will be re-evaluated at that time and may be raised, lifted or extended.

All domestic orders will be assessed a shipping and handling fee of $4.95 per order.

The Star-Spangled Banner Commemorative Coin Act (Public Law 111-232) authorizes the United States Mint to strike and issue up to 100,000 gold $5 coins and 500,000 silver dollars to commemorate the bicentennial of the writing of the U.S. national anthem.

Surcharges collected from coin sales — $35 for each gold coin and $10 for each silver coin — are authorized to be paid to the Maryland War of 1812 Bicentennial Commission after the U.S. Mint recoups all production costs.

The commission will use the net surcharges to support its bicentennial activities, educational outreach, and preservation and improvement of the sites and structures related to the War of 1812. ¦